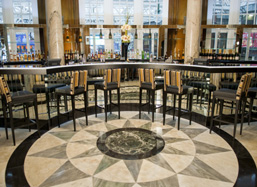 History
Central Station Glasgow was opened in 1879 and the Central Hotel came shortly after in 1883. Designed by architect Robert Rowand Anderson in the Queen Anne style, the hotel is a great example of this architectural approach with its picturesque details, intricate gables and multi-paned windows. Over the years, the hotel was extended and adapted but the main architecture was maintained.

Grand visitors
The Central Hotel took its place in history as the venue to which the world’s first long-distance television pictures were transmitted on 24 May 1927 by John Logie Baird.

Since then Central Hotel has entertained most of the world’s leading politicians, from JFK to Winston Churchill and Hollywood superstars including Laurel and Hardy and Frank Sinatra, not to mention Roy Rogers and his trusty Trigger!  It was reported that Trigger had a bigger suite than Roy Rogers!

The Future
Following a multi-million pound restoration to bring it back to its former glory, The Grand Central Hotel once again takes its place as Glasgow’s leading four-star hotel. Leisure and business guests alike can now experience the latest facilities in stylish surroundings and imagine a bygone era but where time certainly hasn’t stood still.

Our Whisky Ambassador Accreditation is the best means of ensuring your venue is fully prepared to confidently up-sell whisky.  From this, any venues that show a passion for whisky and for ensuring outstanding customer service can become certified venues by having accredited Whisky Ambassadors.

Certified venues can be featured on our website. In turn, customers looking for the best whisky experiences can easily find you.