Wolfburn, A Legend is Born

Wolfburn Distillery is situated in Thurso within the Highland county of Caithness and is currently the most northerly Whisky Distillery on the Scottish mainland.

The last time Whisky was distilled in Thurso, Queen Victoria was still on the throne of Great Britain.  This month marks the long anticipated launch of the first bottles of Whisky from this revived Scottish Distillery in over 150 years.

The original Wolfburn Distillery was established by William Smith’s Distillers in 1821 and in its heyday was one of the largest producers of Whisky in Caithness until it’s unfortunate demise in the 1850’s.

Unbelievably, very few bottles of this famous Highland dram ever made its way south of Caithness due to its popularity and the incredible local thirst for Uisge Beatha.

Unfortunately nothing of the original distillery or its Whisky remains from this golden era. But at the heart of every great dram there is a great water source and by good fortune that water source (The Wolf Burn) was re discovered in 2011 by the current owners Aurora Brewing Ltd. The Legend of Wolfburn Distillery was finally re-born! 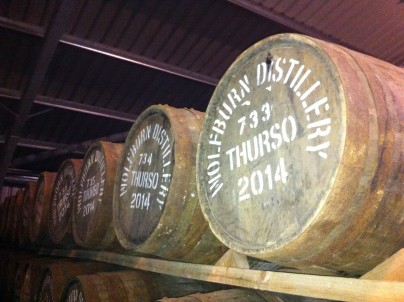 A wild place circumscribed by rugged coastline, and defined by the turbulent North Sea. It’s an ancient place where Vikings once tread and Wolverine roamed.

It is a remarkable environment anchored by the largest expanse of blanket peat bog in Europe, with exquisitely pure water coursing through it’s veins.

Today, the new still men of Wolfburn are hand crafting Whisky once again in the ‘Old Style’ but this time for a new generation of Whisky drinker.   Distillery Manager Shane Fraser is charged with the responsibility of reviving this sleeping wolf and with 23 years experience and a passion for perfection, the future legacy of Wolfburn is surely in very safe hands.

Shane’s initial thoughts on style was to create a light, fragrant dram, typically uncharacteristic of a Scottish coastal dram.  He favours a long slow mash with a prolonged fermentation period and a very gentle distillation plan.

The final dram is simply outstanding.  Light and fragrant on the aroma, sweet with a big Malty base that coats the palate, with a subtle delivery of peat.

A pleasure to behold.

For the last three years Whisky has been maturing in their Thurso warehouses, slowly gathering character.  The spirit has been gently reawakened and now finally, Wolfburn is back!

Leigh is a Whisky Ambassador Trainer, and is normally based out of Kuala Lumpur. She can be contacted on leigh@15pl.co.uk