There are few cities in North America that can boast as proud a Whiskey history as Pittsburgh, a story of brave and thrifty settlers making use of everything at their disposal, a story that’s continued much up to the present day.

Pennsylvania at the time was nothing like we see it today; isolated, hostile and untamed. Most settlers in Pittsburgh were farmers and depended on making an existence out of this land by growing grain. If the farmers made enough to support themselves and their families, they’d usually use the leftover to make what we now call Whiskey. Whisky was thus central to Pittsburgh, not only being used as a much-loved liquor, but also as a form of barter currency for goods and services. 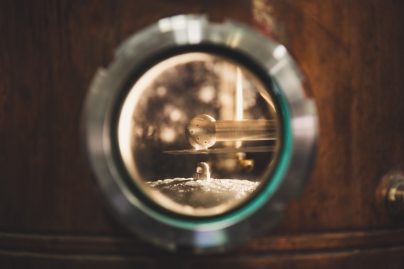 In 1772, Gabriel and Isaac Walker migrated from Lancaster County, Pennsylvania towards near Scott’s Run and Robinson Run, near today’s Settlers Cabin Park. They farmed this land, and with the leftover grains, distilled whisky. Pittsburgh, at this point was the Whiskey distilling capital of the United States, with more than 4,000 stills in operation by this point. Pittsburgh was truly Kentucky before Kentucky ever was.

Unfortunately, George Washington, aware of the deep debts the United States was facing subsequent to the Revolutionary war, decided to approve an excise tax on liquor to raise revenue. Farmer-Distillers in Kentucky, Maryland, Virginia and Pennsylvania burned tax collectors in effigy, and launched attacks. Distillers in Pittsburgh were some of the worst offenders, with nearly 400 burning the Bower Hill mansion of the tax collector. 150 of these were arrested, the Walker brothers included amongst them. Two men were sentenced to hang, but eventually pardoned, one of them being Philip Wigle, a name you may recognise.

To appease the rebels, Presidents George Washington and Thomas Jefferson offered settlers 60 acres of land in Kentucky if they moved there and grew corn, giving birth to the Bourbon industry, which is primarily corn-based and aged in new, charred, white oak barrels as opposed to the white whisky produced in Pennsylvania, which wasn’t usually aged.

German immigrants were vital to Pittsburgh’s whiskey trade, led by Abraham Overholt, who settled in West Overton, over by Westmoreland Country. It was from there that Overholt began to distgill his whisky, Old Overholt. His grandson, industrialist Henry Clay Frick, was born there and Frick’s daughter even preserved many of the distillery buildings in the area, allowing today’s generations to visit West Overton and see how whisky was distilled in the 1800s. 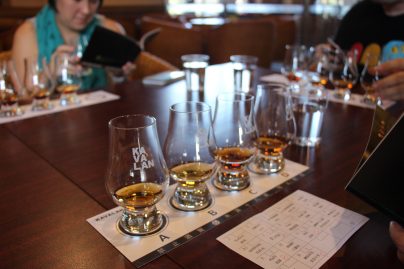 Photo credit to ‘Connie’ from Flickr ©
Link in Photo- Unedited

Unfortunately, Prohibition hit Pittsburgh hard, effectively ending whisky production for the next few decades. However, like those first settlers who didn’t skimp on using all their grain, several individuals have researched and recycled Pittsburgh’s whisky history and resurrected the memory of Peter Wigle, the whiskey rebel who Washington pardoned, by creating ‘Wigle Whiskey.’

The Meyer-Grelli Family opened Wigle in 2012, offering rye and wheat whiskies, bitters and gin, but still producing the white whiskey, as did its forebearers over 200 years ago. With the opening of Wigle and Stay Tuned Distillery in Munhall, Pittsburgh is indeed revisiting some of the Whisky boom it experienced by those first settlers. There’s also the Pittsburgh Whiskey & Fine Spirits Festival. With these in mind, it’s high time that Pittsburgh returned to being the natural Whisky capital that it was borne out of.

Taking place ahead of the Whisky Ambassador courses in Philadelphia and Pittsburgh, our guide will uncover some of Pittsburgh’s best Whisky spots. 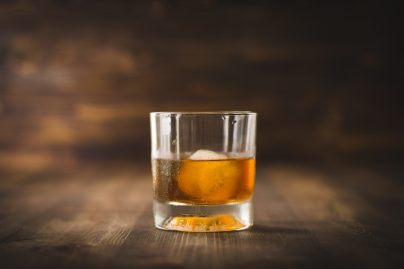 It’s little surprise that Wigle whiskey is going to feature prominently in any article about Pittsburgh’s whiskey history; Wigle started in 2012 and have been instrumental in instigating Pittsburgh’s ‘whiskey renaissance.’ Aside from whiskey, Wigle have started producing both rum and gin (including genever!), but they’ve continued to experiment with their Whiskey also, including experimental whiskeys recently included a four-grain variety, whiskeys aged in unique barrel woods, and a hops-infused whiskey.

Although their bottles can be a little on the pricey-side (perhaps pretty fair regarding their limited availability), you certainly don’t need to leave with a bottle to enjoy Wigle as a distillery. Wigle’s staff are friendly and certainly more than happy to tell you about the distillery’s and the area’s rich whisky-producing history, as well as the process behind the production of their whiskies, which isn’t all too different to how it was made back before the birth of the United States. 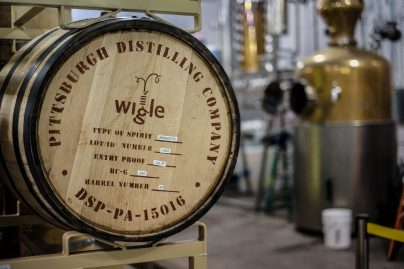 McLaughlin is a small-batch craft distillery located in Sewickley, Pennslyania. Each spirit is crafted by hand, and the distillery eschews expensive machinery or a large staff presence, with volunteers being an intricate part of the operation. The distillery doesn’t even have a sign on the building! Talk about having a moonshiner feeling.

Much like the other distilleries in the nearby area, Mountain Top specialise in spirits with history, aka Whiskey and moonshine, reflecting back on Pennsylvania’s spirited roots. Mountain Top, like Wigle Distillery, started in the early 2010s, before being taken over by Frank & Sarah Kudlack, a husband and wife team.

However, unlike many of the distilleries open across Pennsylvania, Mountain Top are firmly indebted into experimenting with traditional forms of whiskey, including by injecting coffee flavourings (Slow Ride) and maple-leaf flavours, (Jacked Up) alongside more traditional fare. Their moonshine offerings provide even more flavourings for those interested in America’s 1920s-era spirit, including Apple Pie moonshine, Pumpkin Pie, Lemon, Root Beer and ‘Twerked Tea,’ alongside other flavours.

Named after the ‘liberty poles’ that were planted throughout the United States by the rebels who opposed the new laws taxing whiskey, Liberty Pole pride themselves on Pittsburgh’s important whisky-producing past, choosing to symbolise the loving appreciation for a craft that is once again bringing livelihood to Pittsburgh. Eschewing the moonshine-centred approach that other nearby distilleries have taken, Liberty Pole offer a wide variety of whiskies, including Bourbon, Peated Bourbon, Rye Whiskey, Corn Whiskey, Bourbon Cream and the more traditional colour-less whiskey sold in Pittsburgh’s whiskey heyday.

The Whisky Ambassador Course will take place in Pittsburgh, PA on October 20th 2018

The course will also take place in Philadelphia, PA on July 14th 2018.