A couple of good news points at the end of this piece but, for now, it‘s last column of the year time again and, though there are some news items from the industry, it‘s also time to look back and see what I liked best from the whiskies I tasted in 2021. Not all of those I tasted were written up for the column so I‘ll try to stick to those I actually covered here, with one exception. It would be interesting to hear from any of you, too, as to your favourites from the year. Then others amongst us could try if we haven‘t already done so. They don‘t have to be Scotch Whisky. 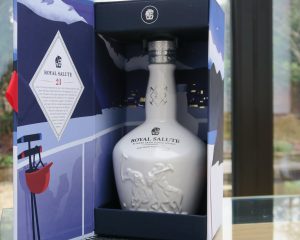 Top of my list has to be the 49 year old Glenfarclas given to me by the distillery owners some time back and only finally opened to share this year (that‘s the exception mentioned above). Also the Royal Salute Snow Polo I was given for Christmas 2020 but didn‘t taste till January this year. Still a couple of drams left in that bottle so high 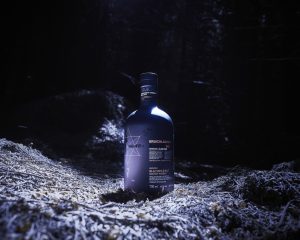 time I finished it. One of my former brands as a marketeer, Laphroaig, released Laphroaig 10 Year Old Sherry Oak Finish and that‘s a whisky I intend to return to many times. A last beauty from manager John Campbell who left them late this year, as previously reported. The Black Art 09.1 from Bruichladdich, in the autumn, was glorious.

The discovery of the Atlantic Sea Salt and Lime chocolate bar Kilchoman recommended to pair with their Machir Bay was a delight. I like the whisky but I liked the chocolate even more and the match is a good one. My preferred Kilchoman launch this year was Kilchoman PX Sherry Cask Matured. Fettercairn Warehouse 2, Batch No.001 back in the spring was another goodie as was Batch 002 in the summer. I do enjoy most (but not always all) of the Fettercairns I‘ve tasted, including the Fettercairn 16 Year Old Second Release from later this year.

Back in spring we saw two Bruichladdichs. I loved the nose and palate of the fascinating Ternary Project but I think it was both nose 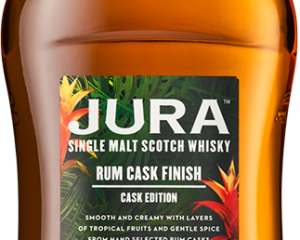 and palate of the Islay Barley 2012 that spoke to me just a little more eloquently. Jura Rum Cask from Whyte & Mackay is probably one of my value for money choices with its lovely tropical notes. There have been some fine expressions from Douglas 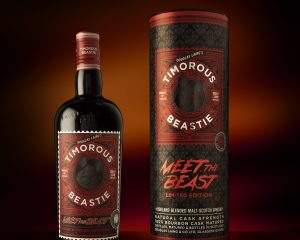 Laing & Co. this year but I reckon the Timorous Beastie „Meet the Beastie“ is my preference. Glen Moray (owned by La Martiniquaise) has put out some really impressive limited release bottlings too, including one with time in Manzanilla casks and one with time in Barolo casks. My Diageo favourites this year come from their Legends Untold Special Releases as in my two most recent columns. An interesting year too for samples of Welsh and English whiskies to be followed into their more mature years. I’ve still to try the Smoked Water from Wales in some whisly as mentioned in a recent column. One for the New Year break, maybe. It was also gratifying to see Ireland’s Waterford Distillery comtinuing to tickle our palates and grab our attention as well as win awards plus even more new expressions from other distillers on the Emerald Isle.

Now, I appreciate that a lot of these whiskies come with higher than average price tags but I‘m featuring a selection from what I am sent.

Obviously, whisky festivals in person were a bit thin on the ground again this year, not just in Scotland and we can only hope that 2022 will be much better. I‘ve already been asked to do another whisky dinner at Feis Ile on Islay next year. Fingers crossed! I‘ve really missed not doing them the last couple of years but have been grateful to manage those two trips to the island on other matters.

The whisky industry has gone on apace despite Covid-19 this year and although some companies have announced downturns in income and profits for 2020/21, plenty have had good years versus 2019/2020 with positive signs for the future. The pandemic situation certainly hasn‘t stopped quality new expressions being launched and we can look forward to more in 2022. The advances in green practices have been notable too. The industry has long done its bit there and is showing initiative once again. 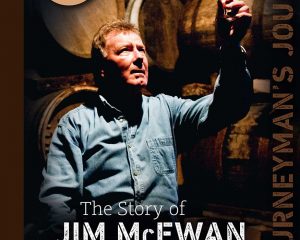 On a very happy note, I was given a copy of Jim McEwan‘s book, „A Journeyman‘s Journey,“ for Christmas and intend to settle down with that soon, dram in hand each time (it will take more than one session to read through it). I‘m intending to be cheeky and ask for it to be signed by the man himself. He was urging me to buy a copy when we saw him on Islay in September and my partner obviously took the hint! I was also given a Christmas gift of a pair of the Norlan whisky glasses, crafted with Jim‘s input.

I tried them out yesterday and they certainly enhance the nose (I used Tamdhu Batch Strength VI – delicious and aromatic dram from this year) but the thick rim takes a little getting used to. There was danger of some chin dribbling at first! I want to compare them alongside my Glencairn whisky glasses, just for curiousity‘s sake. I won‘t use my blender‘s glasses for comparison too as they are for professional use and not everyday use as a consumer. Also, they‘re too small for a consumer sized dram. 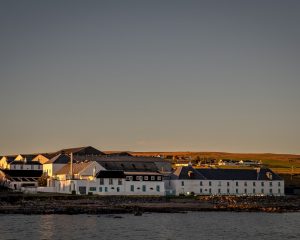 In recent weeks, Bruichladdich has been putting some interesting pieces on its website, including articles about housing on Islay and words from the excellent Dave Broom about terroir. Find out more on www.bruichladdich.com . For those of you hankering after living on Islay – don‘t. At least not right now. It‘s hard enough for people already living and working there to find housing due to the number of holiday rentals and quite high house prices as well as houses which are sourced via families and word of mouth which never reach the open market. With the number of distilleries already there and planned, it‘s more important that the residents get access to good homes. By all means visit, though, when it‘s possible as it‘s such a wonderful and welcoming island.

To mark this honour, the first cask filled at the distillery after the granting of the Royal Warrant has gone on public display, proudly 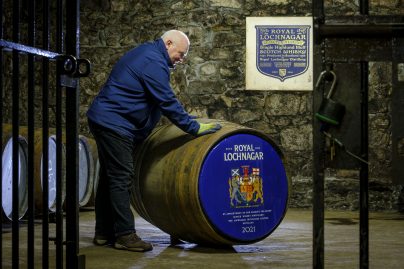 bearing the Scottish Royal Arms in full heraldic colours against a Royal Lochnagar blue background. This was hand painted by artist Thomas Oates, son of a senior carriage restorer whose family has worked for generations at The Royal Mews at Buckingham Palace.

The Royal Warrant is recognition of the regular supply of goods to the Royal Household and permits Royal Lochnagar to display the Royal Arms on its Highland Single Malt Scotch Whiskies and at the distillery in Scotland, a mile from Her Majesty’s Balmoral Estate.“

True, you do need to supply royal households consistently for a number of years before you can think about By Appointment status and there is a process to go through. It‘s not the only Royal Warrant Diageo brands hold but well done to them for achieving it here.

Last bit of good news for this year is that I finally got to do my interview with Cara Gilbert, installed this year as manager at Tobermory. It was conducted last week by phone with me frantically taking notes after the Zoom connection gave us a few issues and I recorded it also on my laptop as back-up. With so much to do before the Christmas/New Year break I didn‘t want to rush writing it up so that will be the first column in January.

Before that, though, a very Happy and Prosperous New Year to everyone. Can‘t recall if I said at end of 2020 that surely 2021 couldn‘t be worse. Would it tempt fate if I said similar again? Okay, I won‘t bother. Back here out the other side in January and enjoy your New Year drams safely, wherever you are.