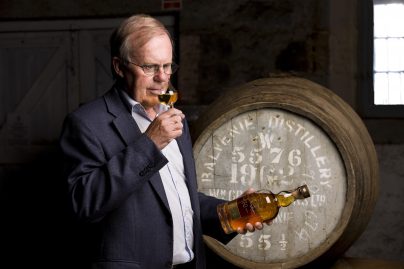 First of all congratulations must go to David Stewart of Wm. Grant & Sons, now being feted for his 60 years in the industry. Such an achievement. I‘ve known of people doing 50 years or so in our industry before but not 60. Not even Jim McEwan! David is the longest serving Malt Master in Scotch Whisky history and the company is making it a year long celebration but no details as yet. Starting in 1962, he joined Wm. Grant‘s as a whisky stocks clerk and worked his way up to Master Blender over 12 years. He’s won numerous awards since then including his MBE from The Queen. These days he oversees all that is The Balvenie as well as overseeing and training the next generations. If you get the chance to go along anywhere and listen to the man, do take it up. 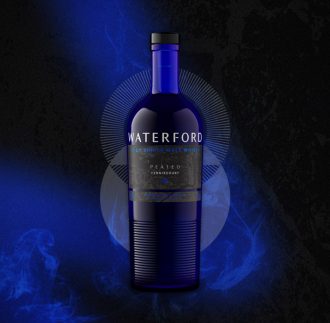 and dried using using peat from Ballyteige in Co. Kildare. The peating level of Fenniscourt is 38ppm amd Ballybannon is 47ppm. Both of these join Waterford‘s Arcadian Barley series which included Ireland‘s first organic whisky and a biodynamic whiskey, the first in the world, they say. There are 11,500 bottles of each one worldwide at a price of 85 – 95 euros/ £90/$95 per bottle. CEO Mark Reynier says,“To achieve this in Ireland with the same authenticity was going to be a much greater challenge, one that our maltsters, Minch Malt, readily agreed to accept. At Waterford we are fascinated by the natural flavours of whisky so I was curious to see what real Irish peat brings to the table, flavours that have been long lost, and ultimately whether terroir trumps peat in the flavour Olympics.
We selected two Single Farm Origin barleys – with distinctive terroirs – to see if those naturally occurring flavours shone through or were in fact dominated by peat. Finding the right quality Irish peat was achallenge but the greatest problem of all was there were no operational kilns left in Ireland; the knowledge had been forgotten. We needed Scottish help.” I‘m surprised to learn there are no operational kilns in Ireland, surely an opportunity for someone given the expansion if the Irish whiskey industry now. No samples but it should be worth a try to peat enthusiasts to explore the differences. 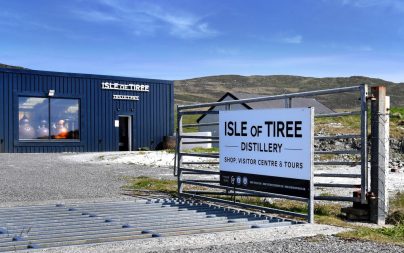 I‘ve been fortunate enough to be given a couple of samples from Isle of Tiree Whisky, one is new spirit and the other is 5 months old.There won‘t be any mature whisky for a couple of years yet but I wanted to nose the new spirit and chart its development towards maturity. The distillery is the brainchild of Alain Campbell and Ian Smith, Tiree natives who are also musicians. They produce award winning gins too so do look out for those. The gins are made in small batches so not in mass distribution quite yet. So let‘s look at the spirit which will become whisky.

Nose: Water biscuits and cheese! Honestly, that was the first aroma. There‘s some fruit but more savoury at first with the noticeable grain notes of a fresh spirit. There is some spice, certainly ginger and a slightly spicy floral. Some sweet spices too. A slightly sweaty note. With water, there‘s soft candy and icing sugar then the spice/ginger come through again.

Palate: A slightly unctuous mouthfeel but with an attractive lightness. Spices and, oddly, a slight wood note.

I‘ll look forward to this one when it‘s mature if the wood is well chosen.

As these two were supplied at different strengths I added enough water to try and taste both at the same level.

Palate: Still slightly unctuous and with a heavier mouthfeel. Quite spritzy on the tongue. Plenty of grain notes but pepper and other spices too. A touch of wax. Very slight wood tannins.

Some interesting changes over the new make. I‘d like to try this again at a year old from the same cask type to examine further development. 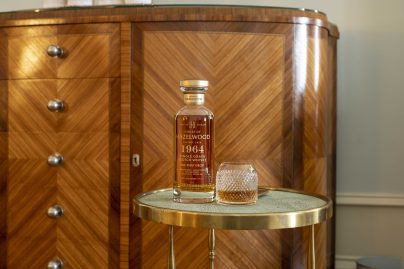 private collection held by the Gordon Family, who are best known for owning William Grant & Sons. For almost one hundred years, generations of the Gordon family have carefully laid down stocks of whisky for special occasions and personal consumption. This rare collection has become known as House of Hazelwood, after the family’s Dufftown home – Hazelwood House. Spanning seven decades and every corner of Scotland, the diverse whiskies held in cask tell stories of remarkable places, lost ways of working, first casks, last casks, the ambitions and achievements of several lifetimes – none of which will be repeated again.

The First Drop, a rare 1964 Single Grain Scotch Whisky from House of Hazelwood’s inaugural collection has sold out within weeks of launch. With 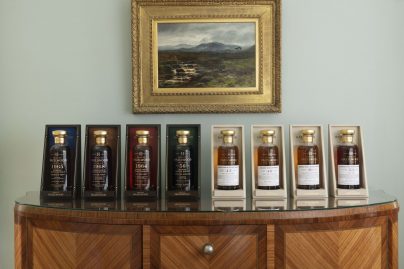 just 71 bottles of this precious spirit available worldwide, The First Drop offered enthusiasts a unique opportunity to own the very ‘first drops’ of new make spirit filled to cask from the Girvan grain distillery on 8th January 1964.

The First Drop is one of eight bottles that make up the House of Hazelwood’s inaugural collection which is split across The Charles Gordon Collection and The Legacy Collection. The four releases in the Charles Gordon Collection are all at least 50 years old starting from £3,000, while the Legacy Collection ranges between 33 and 46 years and are priced between £950 and £1,500.“ You can find more info and make a purchase at www.houseofhazelwood.com . You‘ll need deep pockets but the history and the whiskies may well be worth it. Do also bear in mind, you collectors out there, that these are for drinking, not merely for display. 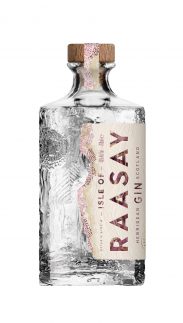 At the end here, I‘m sneaking in a gin. Isle of Raasay has repackaged and I just love this bottle. It‘s inspired by Raasay’s „geological variety, its unique water source, island shores and state-of-the-art distillery.“ Moulds of real rocks were used to create the glass, as well as representations of fossils and Raasay juniper “to encapsulate the island“. A local botanist, Dr Stephen Bungard, helped the distillery pick Raasay juniper on the island and that influenced the recipe development. „The perfect balance of flavours is achieved by distilling juniper along with a select nine additional botanicals, including sweet orange peel, lemon peel, in its copper malt spirit still and vapour infusing the rest in a copper gin basket to retain their vibrancy.“ Yum!