TWA course delegates. All I know is that it is a Highland single malt and 13 years of age. There wasn‘t even any strength supplied on the sample bottle. Mystery! This is an initial tasting note and will doubtless be refined as I go back to it in the near future. I‘m sure there‘s some sherry influence but not sure if it‘s been all its life in sherry or if it was a first fill cask.

Appearance: Glowing amber with tawny highlights. Tears quite swift at first then slower and quite widely spaced.

Nose: Really fruity – sultanas/raisins + some dried stone fruits and apple peel. A fresh nose too. Some soft oak notes and a dab of vanilla. Tiny bit of sulphur.Touch of wax and soft candy (like Dolly Mixtures). With water, a bit more waxiness to the fore at first. More of a barley sugar aroma comes out. Touch of toffee apple and maybe baked honey and the toffee lingers.

Palate: Slightly mouth-coating. Barley sugar and barley grain sweetness. Some rich dried fruit notes – like a light fruit sponge. Herbal and dry too with a tiny hint of licorice with some vanilla and more sweet spices.

Finish: Quite long, herbal and dry with rearguard sweetness and spice.

I don‘t know when this dram will be available to successful course delegates but it‘s a gem and will be worth waiting for. I‘ll be back with a follow-up tasting note on this one as I want to give it a second – and longer – nosing session.

The second note is for the new Kilchoman 100% Islay 12th Edition. I‘m enjoying Kilchomans more as time goes on. This one comes in at 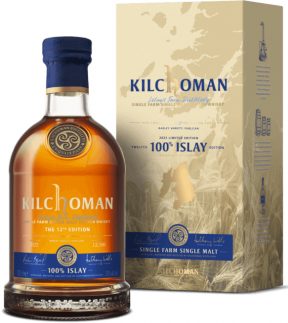 50% abv, peating 20ppm and the barley variety was Publican. It was distilled from several different years of barley harvests then matured in 29 bourbon barrels and 6 oloroso sherry butts for a minimum of 8 years. There are 12,500 bottles available.

Appearance: Bright, sunny gold with light brass highlights. Tears are quite slow and medium spacing; clingy and languorous after the first run.

Nose: Definitely smoky and peaty but fairly soft. Sweaty wool sock (I get that from a number of peaty Islays). Some fruit behind this too and lovely sweet barley notes. A little citrus zest. Dried grasses/hay. With water, slightly farmyardy (but then so is good red burgundy). Sweeter notes more forward with only slight medicinal aroma and dried grasses as before. A slight wine gum sweetness plus honey.

Palate: Slightly oily on the palate and more richly smoky than the nose tells you. Quite peppery and peaty; a touch of spicing with some slight vegetal notes and vine fruits. Malty.

Finish: Long. Smoky and prickly on the tongue. Smoke and malt linger.

Another fine offering from Kilchoman and available now at their stockists worldwide. Priced at around £74.

One more thing to mention. I had a media release recently about a cask of Cambus whisky from 1991 that has been bottled off and is offered for sale in the US only as the first in a series featuring Agent W in his comic book adventures. Bottled by new independent bottler, MaltyVerse,

Agent W is the first and main range by this new company. This new series of single cask bottlings which is tied to an on-going comic book issue, was launched in the US on September 6th. Only 550 bottles were released, and only 550 comics of the 1st Agent W were printed, to be delivered with each bottle.

They say MaltyVerse is the first to release bottles attached to a real comic book issue though it‘s not the first comic book related to whisky. My friend Joel Alessandra produced the first one that I know of, „Lady Whisky“, about 6 years ago. MaltyVerse will continue to release new single cask offerings, each featuring a new printed comic book adventure for Agent W. Each bottle in this first expression will retail for US$399 and comes with a comic book, a gift box, and exclusive access to the website’s comic section. It‘s a fun and vibrant idea and I‘d love it to work well for them. Taking enthusiasts for rarer whiskies and fans of comic books, I‘d be interested to see on a Venn diagram quite how big the crossover is between the two groups! In a way it‘s a pity it‘s US only as I reckon consumers in continental Europe might show some interest too.

That‘s all for September. It‘s been a busy month with time for only one column. There should be more samples to taste for October. I already have a Caol Ila 14 year old and some new Waterford Irish Whiskey expressions waiting in the wings and should be back mid-October.

Till then, happy dramming,