There‘s quite an Islay focus this column. Main item this time is tasting notes of two new Bruichladdichs. The Islay Barley 2012 came out recently but the sample arrived just last week alongside an intriguing one called The Ternary Project (Multi-vintage – 52.1% abv). I like multi-vintage – it sounds nicer than “no age statement”. Rather good at wordsmithing at Bruichladdich. Let‘s deal with that one first as mention of it and a chance to get hold of some via ballot goes live very soon (see below). I was told I couldn‘t mention it till after 12 noon today (29th March). There‘s not even a pack photo yet (to come 1st April) so only one of the liquid so far  and the only details I have, apart from my tasting notes, are from the release:

“The Ternary Project is the first in a series of revitalised small-batch experiments released from Bruichladdich Distillery. Taken from the inner workings of their Head Distiller’s sample room, these non-conformist spirits are revealed for curiosity’s sake.

This Ternary Project, meaning to consist of or involve three parts, pays homage to a time in the distillery’s past when they refuted the practice of distilling one homogenised malt type. Combining their three most recognised single malts, this is three vintages of three spirit types, spanning over three decades of maturation in three classes of casks.

Further detail will be revealed on the 1st of April, when the ballot for 4,000 individually numbered bottles will go live. The bottle will be exclusively available to those who sign up to Bruichladdich’s mailing list before the 31st of March.“

So how does it nose and taste? 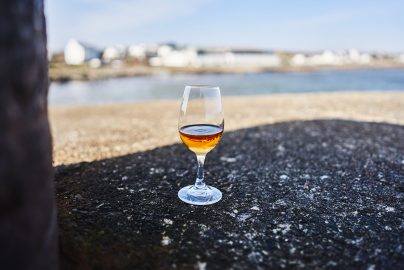 Nose: When Burns described the haggis as “Warm, reekin‘, rich!“ an aroma such as this could have been what he had in mind. It‘s smoky and spicy with strong wood ember notes. Rich and deep. Some rich, dried fruits and iodine. Charred oak; smoky fruit with a a hint of orange oil. Some toffee here too which develops in glass. With water, a bit more orange oil, dried fruits and peat smokiness. Just inhale – it‘s lovely! Then it gets drier on the nose with a tiny waft of yacht varnish before the toffee, sultanas and other fruits return. Fresh yet with a deep toastiness, hint of cologne too.

Palate: Smoky and peaty with sweet and savoury spices. Good weight in the mouth. Some oiliness. Medicinal at the back. Bonfire embers catching in the throat; some barbecue char. Very moreish.

And the Islay Barley 2012 (8y.o. – 50% abv)? We do have a pack shot here. This is the one I tried first as it was obvious from the nose it should be that way round. I also managed to spill some over my note book, rather obscuring some of my Fettercairn notes from a few weeks ago. Ho hum…

Appearance: Medium straw – quite sunny with golden and brass highlights. Tears slow to form and quite close at first 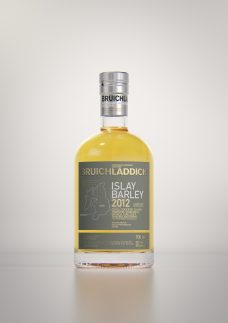 then more widely spaced. Quite glycerine-like.

Nose: Enticing vanilla, oak wood and toffee. Some lemon zest and pear; malty notes; fresh and grassy with a waft of salty sea air too. With water, more pear juice and melon notes. A little more oak comes through; earthen-floored warehouse. A touch of marshmallow and icing then a bit flatter with creamy toffee notes. Warm butter (like an oaked chardonnay) and a little white pepper.

Also delicious and, obviously, so different from The Ternary Project (which does sound like a spy novel). 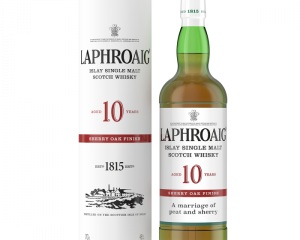 Another new expression over from Islay is from my old colleagues at Laphroaig who have launched Laphroaig 10 Year Old Sherry Oak Finish (finished in oloroso casks). I‘m not looking at their tasting notes till I‘ve done my own and the sample won‘t be with me till end of this week so I‘ll feature that next time. Many of you may know that Laphroaig uses mainly bourbon wood for maturation but there are some sherry casks quietly tucked away there and some older stocks in sherry wood certainly used to be in the warehouses though I‘m not sure how much these days. Anyway, one to look forward to when the sample arrives.

As an Ardbeg Committee member an e-mail came in last week about the new larger stillhouse at the distillery. There‘s a great time-lapse video you can watch of the construction at https://www.youtube.com/watch?v=D3nCPaYE8Go

By the way, a communication a couple of months back made me think that former manager, Mickey Heads, had also 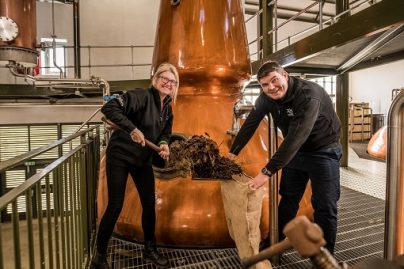 retired as Chair of the Committe. Seems he‘s in post for a little while yet, Jackie Thomson tells me. The new stillhouse will increase capacity from 1.4 million litres a year to 2.4 million a year, such is the popularity of this heftily peated dram.

Tradition has it that a new still must be “sweetened” (I‘ve seen them do the same at Glenmorangie) with some of the spirit ingredients and here they‘ve used peat. What else? Colin, the new distillery manager, ably assisted by Visitor Centre Manager, Jackie, did the honours with peat from Kintour Moss which Ardbeg has used for many years.

In amongst the drinks trade e-mails in the last week or so were words about Islay‘s first ever rum distillery as if it were a new announcement. I first mentioned it here ages ago after an interview with the team at one of the companies

involved – The Vintage Malt Whisky Company. Nice to be first! At that stage the only pics were a drawing of the plans which weren‘t in a format to be used on the web. The other partner in the venture is Ben Inglis whom I mentioned in the previous piece too. A young man with a passion for rum. Anyway the recent release said, ‘‘… building refurbishment was undertaken by a new building company run by Scott Hastie, the grandson and great nephew of the factory’s original owners. Work is nearly complete on this, and has transformed the old place from near dereliction to a great modern workspace – a credit to… the team of tradesmen who have rebuilt it almost from scratch.”

Andrew Crook, Managing Director of The Vintage Malt Whisky Company said “Islay is the spiritual home of our company and we owe our success in a large part to the land and its people. We now have an opportunity to put some investment back into the island and we hope that the local community will enjoy seeing a business emerge and hopefully develop over the years. We still have a long journey ahead but we are delighted to be working with Ben and Scott and very encouraged by all the informal support and help we and they have had along the way so far.”

Good to have so much local involvement. The distillery is expected to be up and running later this year. We now have whisky, gin and, soon, rum being distilled on Islay. No vodka (as yet, but never say never) and I doubt that brandy will be a possibility as Islay grapes are as rare as hens‘ teeth. But you never know… 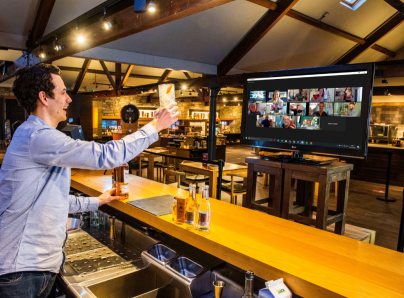 Distillery. There‘s a virtual tour covering the heritage museum at Aberfeldy, a production guide with accompanying Dewar’s and Aberfeldy drams and a lesson in how to make a highball. The cocktail ingredients for (1- 2 people), glasses and drams are delivered to you for £30 all includsive. The event lasts an hour and runs on Saturdays only for those over 18 Bad news is that it’s UK only for now as Kits can’t be shipped overseas. Similarly, their Virtual Cocktail & Tasting Experience (£55 for 1- 2 people) is also for UK residents only and, again, you must be over 18 to take part. This one looks at the story of Scotch Whisky through the famous Tommy Dewarand tells you about the building of Aberfeldy with two samples to taste and a lesson to create two cocktails as well as to take part in a quiz (no mention of prizes!). 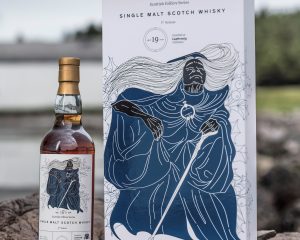 If you‘re a person or business which likes to seek out independent bottlings for yourself or your customers take another look at Cask 88 on https://www.cask88.com/ . They got in touch last week for International Whisky Day (it was Saturday, 27th March) to say they still have some bottles left of their Nuckelavee (31y.o. Highland Park) and Cailleach Beira (19 y.o. Laphroaig) that I‘ve written about before as well as the 2nd and 3rd releases from their Scotch Whisky Express series which are Fettercairn and Benrinnes respectively. If you‘re not familiar with these latter two distilleries, I‘d encourage you to get to know them.

A note just in today to tell me about the latest Kilchoman Loch Gorm expression. Sample requested and promised so here‘s hoping. I‘ll use the pack shot then. Two samples of the latest Waterford expressions arrived just today so no time to nose/taste those yet. More on those to come next time. An interesting juxtaposition to Bruichladdich due to the terroir aspect but, of course, the Waterfords are much younger. Also today came a note about the new Jura Rum Cask Finish. More on that next time if I can get hold of some.