I’d like to start this month by singing the praises of Martell Cognac and having a little comparison look at some aspects of cognac and whisky. It’s always good to know more about drinks other than your own main sphere of interest. On holiday this month I was fortunate enough to have a special visit to their site and vineyards, though sadly not the distillery as it’s pre-distillation cleaning and maintenance season. Grape harvest was about to start when I visited. I apologise here for the lack of pics from my own visit but they are always downloaded into my partner’s computer and that’s just decided to die so I can’t access them. Therefore I ahve taken some from the internet including from a Pernod Ricard source.

I also had the chance to see from the outside a few of the other cognac visitor centres in the town. Certainly in the case of Martell and a certain other major brand,  it’s really interesting how different in tone their visit operations are from the whisky industry, as well as some similarities. I had my memory refreshed, too, as to things I’d forgotten since my wine and spirit studies some years back and learned much that was new to me, especially the Martell way of holding its wines off the lees, unlike others and that you shouldn’t swirl the cognac in the glass before first nosing. 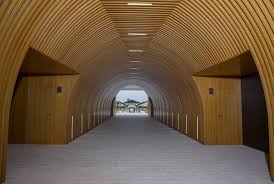 Our visitor centres, with perhaps the Macallan’s new site as an exception, tend to be more traditional in appearance and internal presentation. 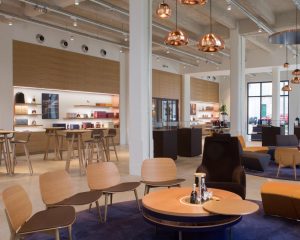 The Hendrick’s Gin centre at Girvan is also rather glossy but then it’s not whisky. Martell certainly looks largely traditional from the outside (boutique and entrance to corporate offices apart) but the inside is vastly different. The use of technology to enhance the experience and to explain things to the cognac novice or aficionado is both fascinating and delightful. Then there’s the use of art patronage in the cultural foundation and sculpture in the visitor centre to highlight certain aspects of the brand values and represent parts of the process – I found that particularly French and haven’t seen anything like it from the whisky world. 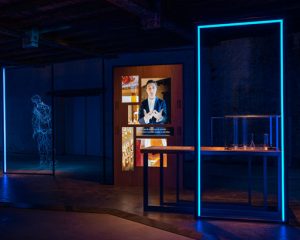 We spent a whole afternoon there in the company of an excellent Brand Ambassador. Not open to the general visits are the art installations on the corporate side and the rooftop bar 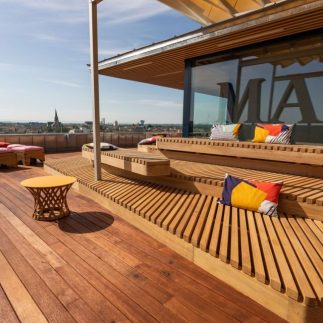 which are reserved for particular groups. We didn’t do any tasting up there (did that in the lovely boutique) but did get up to gaze out over the rooftops of Cognac – as it’s the tallest building – and enjoy the hot, sunny weather. The only whisky balcony bar I can think of is Bowmore and I suspect Martell get more use out of theirs due to climate!

Another interesting point is how much more upfront the cognac centres are about using the spirit for cocktails and mixing. Obviously, Scotch does a lot more of that now (as exemplified by one of Martell’s sister brands, Ballantine’s) but we’re generally less open about it. There was plenty of mixing encouragement on the Martell rooftop bar and, in the windows of another house’s visitor centre, there were signs promoting cocktail making classes in different languages with their top bartenders. Maybe something we can learn from them. I also found out that if you chill cognac you enhance the wood flavours. This speaks to the ice/no ice debate that we still tiresomely get in Scotch Whisky. Try your whiskies at room temperature and chilled and warmed in the hands (or in a wine warming sleeve) too and see what differences you notice. It all enhances the drinking experience.

This is a seriously great place to visit where they do a number of different levels of tour and it’s necessary to book in advance. If you’re visiting that area of France as part of a holiday or going specifically to learn more about cognac, I’d urge you to visit here as you won’t be disappointed.

Moving back to Scotch Whisky, before I went away, Bruichladdich put out a release on their new Barley Exploration series offerings, Islay Barley 2011, The Organic 2010 and Bere Barley 2010 all at 50% abv. The samples turned up just as I’d uploaded last month’s column. Some of you may have done the online tasting of them if it’s happened yet but I prefer to write my own notes anyway. 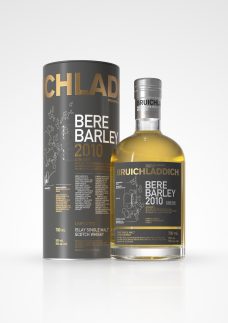 So how did they fare, in my view? Well, I enjoyed all of them and aspects of some more than others. Definitely a fascinating trio to look at different barley types. The one that most people will find “different” is the Bere Barley 2010 if you haven’t tried whisky (or indeed anything) made with bere barley before. It has a sharper and more acidic nose than the other two, somewhat sour at first with wax polish and wood furniture, some varnish and a bit of vanilla, bitter lemon and apricot fruit. The sourness does dissipate quite a bit but the palate is much more pleasing than the nose. Distilled from Bere barley grown and harvested on Orkney in 2009 for a 2010 distillation than matured in ex-bourbon American oak casks for a minimum of eight aged years. There is a little wisp of char notes here too. 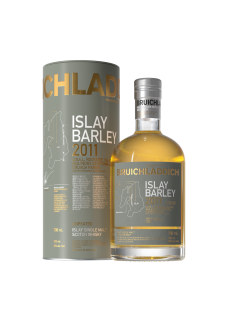 The Islay Barley 2011 is the youngest of the trio and is produced from Islay barley grown in 2010 for 2011 distillation. It’s matured in 75% ex-bourbon American oak casks and 25% ex-wine European oak casks then aged for 6 years. It certainly has a youthful nose plus lemon drops and zest as well as a touch of acetone and orange but still distinct other  fruit notes, some wood and a little bit of sweaty sock. This one has more overt char notes which was a surprise, though presumably down to the bourbon casks and that’s what extends the finish.

The Organic 2010 was definitely my favourite of the three. It had the most going for it on nose and palate. Cooked cereal and soft, fragrant stone fruit; floral notes as well as some oak and damp woods; nuttiness (pecan/walnut) 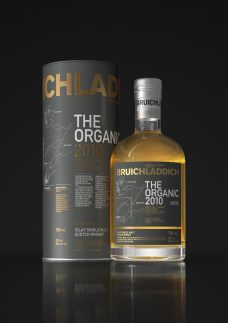 and cooked banana. With water there were marshmallow aromas and richer fruit with fresh lemony notes too plus some coconut. On the palate it is silky smooth with lemon pepper, liquorice, dried apricots, nuts, a dab of salt and some cough sweets and a little coconut. The finish is both sweet and dry with dried herbs. liquorice and heather and a touch of salt at the side. Distilled from organically grown barley, grown at Mid Coul Farms in 2009 for a 2010 distillation. It was  then matured in ex-bourbon American oak casks for a minimum of eight aged years yet this one shows no char effect.

Tomatin have also recently released two new expressions, one finished in rum cask and one in amontillado sherry. We’ll look at the Tomatin 2009 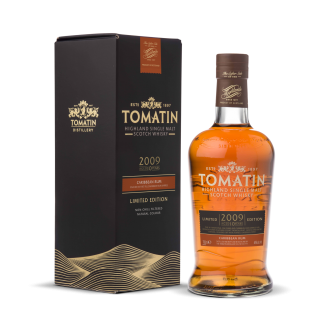 Caribbean Rum expression this month and the amontillado next with maybe a little comparison with their 12 YO next month too.

Appearance: Light – medium gold with brass highlights. tears quite swift and close. This will be 10 years old at most.

Nose: Quite youthful notes. Sweetness like candy canes; lime zest and juice; oak; tropical fruits and soaked cake fruits; pineapple upside-down cake. Warm apricots. With water it’s         softer and takes a bit of time to reawaken. Still a light and somewhat delicate nose but it is young and the rum influence is pitched correctly so as not to overwhelm. A bit of almond here  too with sultana and stone fruit notes.

Finish: Short – medium with spiciness and then a dry finish.

The 2009 Caribbean Rum expression was initially matured for 9 years in traditional Scotch Whisky oak casks before a one year finish in first fill Caribbean rum barrels. This is the distillery’s second release using Caribbean Rum Barrels, having previously released a limited expression in 2016. This limited run has produced just 7,200 70cl bottles (46% abv), available worldwide and set to retail at around £49 or local equivalent, taking account of tax and duties.

Highland Park has released a couple of new expressions and I was sent a letter about Valfather, promising more info to follow but that’s not come in yet so, hopefully, more soon. There’s also a major study being undertaken on yeast types and flavours in whisky and I hope to get in touch for more in-dpeth info over the next month. There is a bit on yeasts  in the Whisky Ambassador advanced course and the Scotch Whisky Research Institute did indicate during the writing of that, that they think a lot more work needs to be done on both yeasts and barley.

For now, keep enjoying your drams and I’ll be back in October. Hoping to line up another small whisky company for interview for November too.