The month’s hot news is that Edrington have put The Glenturret Distillery/brand and the Cutty Sark brand up for sale. It’s been covered in other websites and on TV news and I have no further info, as yet, so no further enlightenment from me. Edrington have done a lot of good things with both brands in more recent years, most noticeably with Cutty Sark under Kirsteen Campbell’s blending stewardship so I just hope somebody decent buys them and keeps the momentum going. 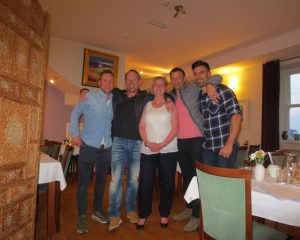 My annual whisky dinner at The Port Charlotte Hotel was just after last month’s column. This was the sixteenth year  of doing this during the Islay Whisky Festival (started off with my friend, whisky writer Helen Arthur). There were some previous clients there and I made some new friends from South Africa, pictured here. It was fun to be in their company for the evening.

A new chef this year and another excellent menu with a few challenges for whisky matching. The menu was: 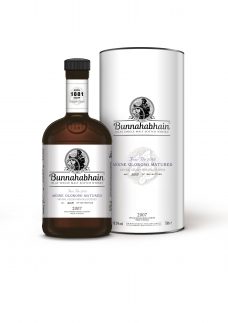 The menu photo this year was the Bunnahabhain Moine Oloroso Matured. I knew I wanted a Bunnahabhain for the lamb but hadn’t decided which one. Senior Blender for Bunnahabhain’s owners, Kirstie McCallum, was at the same trade event as I was mid-May and said , “I know what would be great with that – our Moine Oloroso Matured.” Well, I got the flavour profile and a tasting sample the day before the dinner and reckoned she was right. The fruitiness and nuttiness of the Bunna would have matched the lamb anyway but the notes of embers from the peat smoke were great with the tomatoes and the whole matched the veg. Tomatoes with whisky can be as tricky as tomatoes with wine but smokiness and tomatoes can work well if the smoke balance is right.

I’d been in a quandary once I’d tasted both about whether to match the Bunnahabhain or the Lagavulin with the lamb and same with the dessert. In 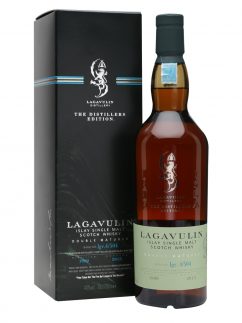 the end I had both whiskies served at the same time with a request to try some of each with both courses. As it happens, the great majority agreed with me but, really, both whiskies were fine with both dishes, my choices on the menu being received better as matches. The Lagavulin Distillers’ Edition was a delightful dram and it was a joy to have it match the chocolate dessert so well. All of the whiskies are great but these two, along with the Jura, were my standouts of the night. By the way, I recently had a Bunna 12 Year Old with a chocolate dessert and it was a fine match too. 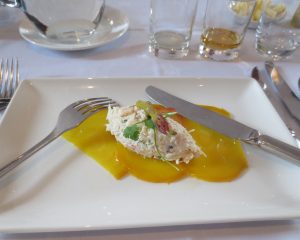 The Jura Journey (the new entry level Jura) was great with the crab ( just possibly the best match of the night for me) as was The Laddie Eight with the soup. One Swiss German guest disagreed with me on the soup match but no one else did.  That’s part of the fun, though and I’m glad to say all matches I’d chosen worked really well. Note also that you can do peaty, smoky whisky with canapés and the Ardbeg 10 worked a treat here. As ever, Bowmore with fish was a classic pairing – even with some soused mackerel (whisky with vinegar not an easy option) and their 12 Year Old rose beautifully to the occasion. Laphroaig Quarter Cask with coffee and whisky tablet alongside its coconutty goodness slipped down so easily. My grateful thanks to all the distillers for their support once again and to the hotel chefs and front of house team for all their hard work. It was a pleasure to do the event yet again.  I thought I’d stop after the fifteenth last year as fifteen seemed a nice round number but several people asked if I’d do another one so I may feel compelled to do 20 for another round number! Jim McEwan said wait till you’ve done 50 but I’d likely be too old to stand by then. 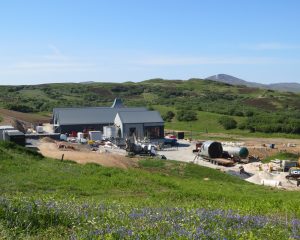 I did get the chance, when over there, to see the site of the new Ardnahoe Distillery, being masterminded by Mr. McEwan. It was still a 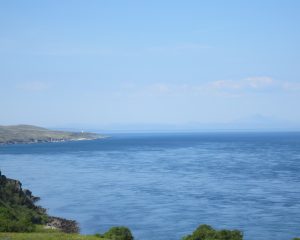 building site but looked great on the lovely hot, sunny day I was there. The still house is going to have the most fabulous view in sun or more dramatic weather. A couple of pics here to let you see. They’re thinking it will be fully ready sometime in August but won’t set a specific date. In case you’ve been to Islay before and you’re wondering where it is, you go up the road to Bunnahabhain and it’s off to the right a little way up that road. There are hollows in the hillside facing the water that you can see only from the water so a good prospect for boat trips in future. Loch Ardnahoe is the water source and it’s the deepest loch on Islay though after all this recent heatwave I’ll bet it’s gone down a fair bit. No worries though – there will be loads of rain on Islay at some point. The cafe/restaurant here will have seating for plenty of people who can enjoy good local food and the views and they seem to have pulled a great team together to work in all aspects of the distillery. 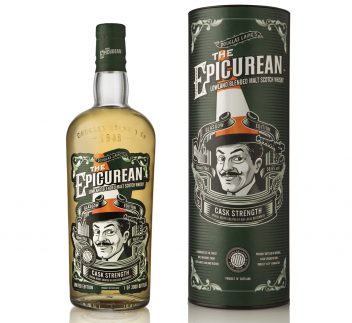 Several things sent to me to taste in the last few weeks but I’ll cover only two of them here. First is The Epicurean Cask Strength Glasgow Edition (58.6%) from Douglas Laing & Co. The  media info came out at the end of April and the  whisky was released during May but the sample reached me too late for last month. This new bottling is the result of a unique event held at Laing’s Glasgow headquarters earlier this year. A group of “mixology masters” were invited to join them for a “blend your own” session at the end of which Fred Laing selected his favourite recipe to bottle as the first ever limited edition for their Lowland blended malt. It’s available from specialist shops at £45.99. No age statement. Now there’s a limited number of Lowland distilleries producing mature single malt so we can try to guess here. Those of you familiar with Glasgow will note the hat on the label echoes the traffic cone on the Duke of Wellington statue in the city.

Nose: Quite young and spirituous. A touch of stone fruit and flowers; a dab of citrus zest. Then sweeter, cereal notes. With water, Dolly Mixtures and creamy – almost peach and cream. It’s an enticing little nose here. Not big and assertive, not from Lowland whiskies.

Palate: an initial sweetness then some malted barley and oak. Slight bitterness at edges of the tongue. A zip of savoury spices and pepper.

Finish: Quite long and dry with zesty pepperiness; plenty of cereal and hay notes.

I think this one would be a great base for mixers or cocktails but maybe that’s what you get if you ask mixologists to create blends. Great job! The other samples sent were the new Scallywag 10 and Big Peat Feis Ile 2018 edition so I  may try and fit one of those in next time though I believe there are samples from other companies on the way.

Second one I’m going to cover this time is the new Delilah’s XXV from Compass Box. It’s not chill-filtered and comes out of the bottle at 46% abv. It was created to celebrate the 25th

anniversary (coming in August) of Delilah’s whisky bar in Chicago and is a collaboration between John Glaser at Compass Box and Mike Miller, Delilah’s owner. It’s based on a parcel of the original Delilah’s which married grain whisky from Cameronbridge, single malt from Teaninich and single malt from Glen Elgin.  That first expression, aged in US oak, came out in 2013 so they’ve aged this for another five years and added in some sherry matured whisky also from US oak. Should be sweetly spicy! There are only 8,520 bottles worldwide and it retails at about £100 per bottle. The new additions are from Linkwood (always great in sherry wood), Miltonduff (an underrated dram) and whisky “made near the town of Aberlour”. There’s also more Teaninich, this time from sherry cask.

Nose: Vanilla with dried fruit; creamy caramel/toffee from sherry casks; rich blossom – almost like jasmine. Stewed gooseberries. With water, more dried fruit and sweet spices; custard; a zip of citrus; sweet oak. Indeed, quite a heady caramel and oak nose with water. These guys have a knack for coming up with things I could breathe in all day.

And an interesting – or yucky – notion to wind up this month. Beavers are cute little animals. I’ve watched them live in the wild and on film and love seeing them swimming or busying about their habitat. However, a US whiskey producer, Tamworth Distillery in New Hampshire, has come up with Eau de Musc, a two year old bourbon flavoured, amongst other things with castoreum. What? Apparently it was long used in the food industry as a flavouring and in perfumes. It’s also used in a brand of Swedish schnapps. Now, I know we use musk from the glands of deer and other creatures in perfumes (seriously, who first thinks of this stuff?). However, I didn’t know about castoreum, a secretion from a gland near a beaver’s backside (under its tail). Not sure I’d be wanting to eat or drink anything with that in it even if the USA’s FDA does consider it a safe food additive. The distillery has teamed up with Anton, a beaver trapper who does some “removing” for the state, as apparently the beaver population needs to be managed and the poor little guys don’t relocate well so, the distillery tells us,  “So Anton, like all good trappers, uses every part of the animal. The fur is sold, the meat is eaten and the castor sacs are used as lures for future trapping bait. This source of New Hampshire beavers makes for a responsible market practice.” Sorry, but my sympathies are entirely with the beavers.

Till next month, happy dramming except anything with stuff from beaver glands in it.