It seems to be an unwritten rule of this writing  business that no sooner have you written and posted a monthly column than something else really interesting to write about happens and you have to wait another month to post it. This month – it’s Fettercairn.

This is a distillery owned by Whyte & Mackay which has a lovely visitor centre and whose whisky output has been largely used for blending over the years. Having repackaged and created new expressions of Jura and with The Dalmore established over many years as a great single malt, it’s now Fettercairn’s turn – and somewhat overdue. A group of whisky scribes and others whose professional lives involve whisky were invited to Edinburgh for an 8-course tasting dinner in Timberyard with pre-dinner cocktails, Fettercairns paired with the menu and a chat from Fettercairn manager, Stuart Walker.

Stuart told us of the distillery origins and how it has an unusual feature of rings round the stills which were added in the early 1950’s to act as a cooling jacket. This allows them to 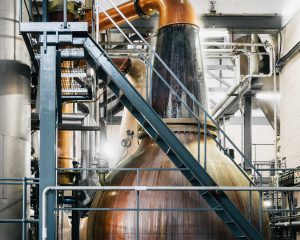 manipulate the style of spirit and is unique to this distillery. I decided to call them Rings of Saturn and the packaging reflects that feature. Possibly a name for a future expression? Anyway, the distillery was founded in 1824 by Alexander Ramsay, making it one of the first legal distilleries and hired four formerly illicit distillers to work there. It’s been quietly producing good whisky ever since. W&M refurbished the distillery in 2015 and rebuilt the tun room. I must get back up there myself as it’s years since I last visited and I’d encourage any reader of this to go and see them. 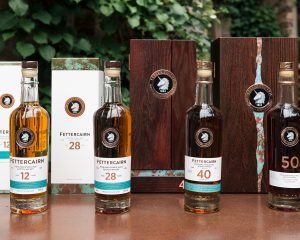 The new range has Fettercairn bottled at 12, 28, 40 and 50. Generally its characteristics include tropical fruit plus sweet and dry spices. The 12 year old is not a light whisky but lightened by use of the above-mentioned rings. There’s an oiliness and body to it with lychee and tropical fruits, raisin, sultana and vanilla. The 28 year old is matured in bourbon wood only. There’s very definite oak with rich raisin and mango fruit, as well as orange blossom, caramelised sugars and citrus. The palate is just as delightful as the nose, with even a touch of mint which should be the bourbon influence.

The 40 Year Old is a single cask from 1977 – a palo cortado sherry cask which throws a touch of salt into the flavour. It’s deep and rich on the nose but still retains a freshness alongside toffee, caramelised pineapple, baked stone fruits and cake spices. The 50 Year Old “grande dame” has deep PX/oloroso sherry cask colour and very deep and complex fruity and spicy yet amazingly fresh nose. It’s from a port pipe and so a lot of wood contact which shows on the palate though not over-oaked. I did find this one had a shortish finish.

The cocktails at Timberyard were really inventive, as was the cuisine. The first drink used fresh larch needles for a citrus note – marinated in Fettercairn new make spirit and cut with water. The bark was also used and steeped in a little sweet pickle liquor then sweet vermouth added. Another was a sea buckthorn sour which was awash with smoky embers, pineapple and some salt. Both delicious. I have to say I didn’t agree with some of the whisky pairings with food but the food itself was really tasty and creative. The Fettercairn expressions and the cocktails were the intended stars of the evening and they definitely were.

Before  moving to other topics I’d like to applaud W&M for holding an event in Scotland to launch this and for offering accommodation and travel assistance. Twice recently I’ve been invited to whisky events by well-known companies (well, their PR agencies) but both in London and no prospect of a Scottish version (I did ask). I am very grateful for the invitations but there are plenty of whisky writers, broadcasters and influential retailers up here in the home of Scotch Whisky and a trip to London isn’t often a practical option due to time needed for such a trip and/or budget. Others have expressed the same views in the past, direct to whisky producers. It would be good to have things not so London-centric.

Northumberland is to have a whisky distillery, Ad Gefrin in the town of Wooler, under plans submitted by a local family in an attempt to boost tourism to the area. If it goes to plan it will open in 2020 with its first single malt release in 2028. One to watch with interest and I hope it works out well. I wonder what their u.s.p. will be? Just “Northumbrian whisky” isn’t too riveting there will surely be a part of the story we don’t know yet. The continuing trend for small producers remains interesting.

Two examples of Highland Park which did not turn up in time for last month are now with me so, following on from Spirit of the Bear we now have Loyalty of the Wolf and Wings of the Eagle so that’s three different flavour profiles for HP in these expressions. They’ve been in European airport shops since July and will be in Asia from September. 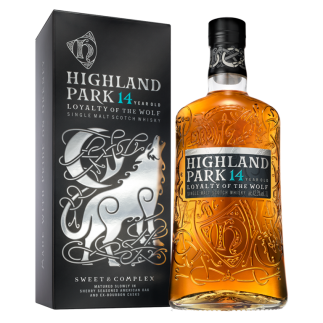 Nose: Light, almost ethereal at first. Then more depth kicks in as it sits in the glass. Apricot fruit and cooked honey. No obvious smoke. Buttery with a dab of oak vanilla. With water not a lot of change. Slight increase in oak notes and a touch of smoke. Bit of Dolly Mixture (soft candy) sweetness. Lovely rounded, mellow nose. 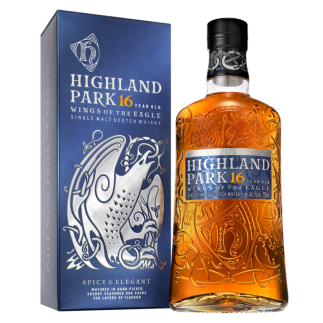 Palate: Medium bodied and subtly smoky; quite rich and fruity. Some nutty notes. Again, oak astringency with bitterness in middle of the tongue; slight liquorice.

Finish: a touch vegetal and very dry but also some honey and burnt sugar. Long finish with liquorice aftertaste too.

Well, that’s it for August. Once my bespoke tour clients who are here right now have gone home, I get to go on holiday. It’s been a long time coming… Back with you again in late September.