A couple of new whiskies on taste and, as promised, a revisit of Octomore 11.2 as I thought it would be good to try it again on its own, away from the other Octomores. A couple of new expressions and other bits of news too. First of

all, you can hear Richard Paterson, renowned whisky creator on the new “Live from the Sample Room” podcast series from Whyte & Mackay. Honestly, Richard has so much knowledge to get out that the delivery is energetic and quite forceful! I was exhausted just listening. I’ve had the good fortune to listen to him at other times, both in public gatherings and one-to-one and it’s always a pleasure. Catch this interview on:

The first whisky on taste this time is Glen Moray Sauternes Cask Matured (59.6% vol, natural colour and not chill-filtered), matured for its full 14 years in casks from a certain famous Bordeaux sweet wine but they’re not allowed to use the brand name on their labels. Clue – it begins with a Y! It is launched on to market today at £79.95 (bargain!), with 1,248 bottles produced. It was the subject of a Zoom session for some of us scribes and bloggers last week which featured Master Blender Kirstie McCallum and Brand Ambassador, Iain Allan. I’d tasted it and done my own notes beforehand but was also really keen to hear them. The sample sent out in advance also contained a little tube of 3 macarons – one coffee, one chocolate and one infused with the whisky which I dutifully tried alongside, during the online meeting. Delicious! The coffee macaron worked best with the whisky, for me. 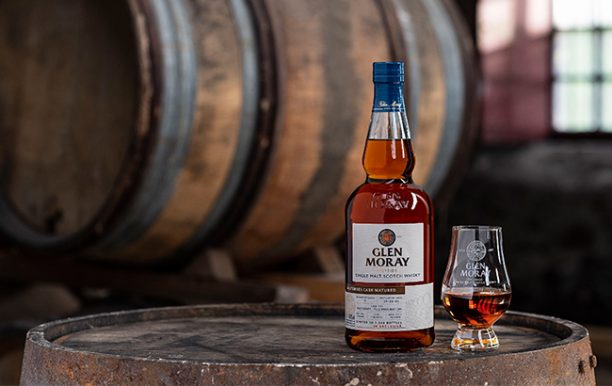 This Glen Moray is part of a new Warehouse 1 Collection (which will always be cask strength and not chill-filtered) and Iain reminded us that this is the warehouse where they have their experimental and unusual casks. He takes visitors in there (and will when tours can restart) to show the wide range of maturation possibilities for Glen Moray. It’s also interesting to note that this warehouse sits at the bottom of Gallowhill where public hangings used to take place in centuries past. Both he and Kirstie reckon Glen Moray works well with many types of cask as its slightly oily nature melds well with other flavours.

So to the notes:

With water the toffee and honey notes persist with the touch of sulphur; peach juice; candied nuts, creamy toffee and milky coffee.

This parcel of Sauternes casks will be refilled with new make spirit as they have more character to give. They do have other Sauternes casks, some from the same producer. After a long search, Kirstie has found some good tokai wine casks which will be used as well as some Italian wine casks for finishes. Plenty of good stuff yet to come, then. One participant asked how the distillery had done during this year of mainly lockdown. Seems they have hit their normal distillation target of 5.4m litres but didn’t have the same silent season. That was moved to August as there were no visitors allowed this year.

For now the Warehouse Collection is for UK only. I did ask if a bottle had been offered to the supplier of the casks to show them what they could do in conjunction with fine spirit but apparently not…yet!

Moving on, the Bushmills Irish Whiskey info was changed to be embargoed till Tuesday 1 December but, as this column is due today, they have kindly allowed me to upload today as I promised to wait till late. So here we are after 11p.m. 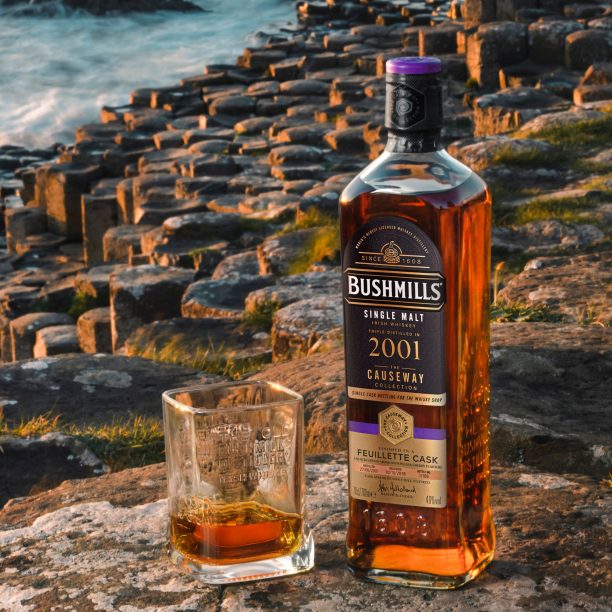 available and those exclusively through The Whisky Shop here in the UK at….wait for it…£200 per bottle. Available from 7th December. Like the Glen Moray, it is also part of a new range, The Causeway Collection and is the first cask strength Bushmills in the British mainland. In all, there are ten expressions and a number of finishes for nine countries including UK, France, Germany, China,Portugal, Nordic countries and Global Travel Retail. 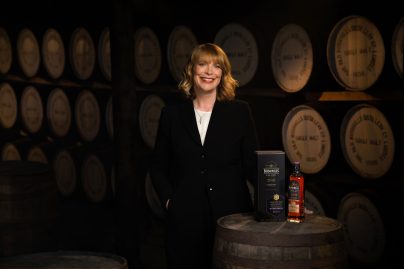 for writers was held recently for this one too, featuring Bushmills’ Master Blender, Helen Mulholland who is also Ireland’s first female master blender. She’s been there nearly 30 years and first arrived as a student on the industrial placement part of her course. Her spot was in the lab examining the malted barley, water and spirit samples. Her masters thesis was on whiskey maturation in wood (at least one other master blender I know of had a research interest in this area – there’s a lot still to learn there).

The tasting started with Bushmills 10 Year Old to remind us all of the standard bottling. Helen says it’s the hardest to get right and keep consistent due to the subtleties there as tiny changes will show up. The short presentation was further enhanced by the reading of a poem, “If Stone Could Speak”, by young Irish poet, Niamh McNally. It’s a lovely work and speaks of the natural forces that contribute to Bushmills like the landscape and water that flows over basalt.

Now, the Bushmills 2001 Feuillette Cask uses red burgundy casks and this is very noticeable on the nose. Those classic red burgundy notes of red fruits and toasted oak shine through but let’s look in more detail.

Nose: Toasted oak with sweet raspberry and redcurrant fruits; earthiness and violets; also heady blossoms like jasmine or lilies; a bit of marzipan. Chocolate and then toffee as it sits longer in the glass. The scent of crunchy honeycomb and sweet spices.

Palate: Ripe, crunchy red fruits but also honey and a touch of chocolate; slightly zesty feel on the tongue.

Helen has been working on formulating a collection for some 15 years and there will be more to come in the first half of 2021. She should be really proud of this first UK exclusive. I loved it.

I said some weeks back that I‘d go back to the Octomore 11.2 and re-taste as I wasn‘t sure tasting it amongst the 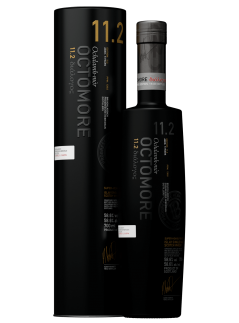 others in the new set really helped. Well. I‘ve done that now and got rather more out of it this time. All of what I spotted last time was there but there was a fragrant earthiness this time and more of the plum notes and cooling embers/ashes of the deep and attractive (but not unsubtle) smokiness. A really attractive and rounded nose. Some pear drop/varnish notes too. And fresh sea air – I‘ve stood outside Bruichladdich on a breezy day! Plus treacle toffee, spice and waxy notes as well as the slightly sweaty wool sock I often associate with peaty Islays. There‘s a slightly treacly note on the palate too; some unctuousness but very drying in the mouth. Plenty of oak char and the throat-catching taste of smoking hay.

I enjoyed this one first time round but it was overshadowed a bit, sandwiched between 11.1 and 11.3, so I‘m glad I tried it again and appreciated it even more. If tasting the range yourself, maybe try this one first of the new set as some of its nuances might be overridden by the others in this latest collection. It‘s quite distinct from the others, given the time it had in red Bordeaux casks.

I had to miss out a new Compass Box expression the last time due to lack of space but here we have Peat Monster Arcana and more. A cask strength version of The Peat Monster was further matured in three French oak custom casks for more than two years and then blended with malt whiskies from Talisker,

Miltonduff and Ardbeg to complement ‘‘the richly spicy and more subtly smoky profile that developed“. Compass Box Founder and Whiskymaker John Glaser commented, “Peat Monster Arcana is the first Compass Box to feature smoky whiskies matured in French oak. We’re delighted to be able to build on this experiment in our 20th anniversary year and we hope dedicated fans of The Peat Monster discover a new side to this charismatic whisky.” This whisky is available now.

Also new from Compass Box is Magic Cask, an enticing sounding blended malt of 92% first fill bourbon barrel from Imperial Distillery (now closed) and 8% from an oloroso-seasoned butt from an unnamed distillery near Aberlour. Any guesses?! The latter will be the one year old spirit “of robust character” they re-racked in 2016 into the sherry-seasoned butts and then found development of one of them particularly fascinating in 2019. The hunt was then on to find the best way of using that cask and here we are.

There are 5,538 bottles. As there is still no Brexit agreement, some European markets (France, Germany, Netherlands) have received allocations early. It‘s on the CB webshop and in UK in December and other markets such as USA and Canada in early 2021. Price is around £145 or equivalent in other markets subject to local duties and taxes. CB suggest it’s best appreciated neat as a digestif as their notes tell us: “Aromas of marmalade and chai tea spices, with hints of plum. Ripe golden dessert apples dominate the luscious palate, supported by an oaky richness. Flavours of toffee and cocoa powder are also conjured up.” Works for me. 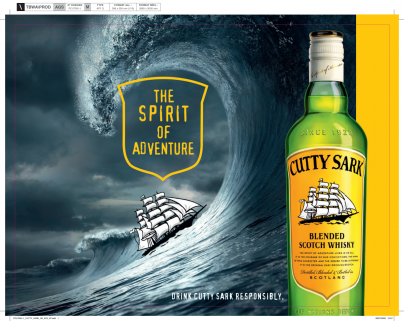 For the first time since acquiring the brand in 2018, French drinks company, La Martiniquaise has created a global campaign for Cutty Sark blended whisky.

The Spirit of Adventure, showing a version of the iconic Cutty Sark masted ship, will have a large digital presence via social media and aims at, ‘‘leading the way to adventure-based local activations and sponsorships“. The target is the next generation of Scotch drinkers. As it‘s global look out for it on your social media feeds.

That‘s all for November. Back middle of December.

Till then happy dramming and take care.