Two pleasant surprises this week – well, I knew they were coming but not exactly when.

First arrival was a bottle of Umiki from Japan. Later that day was a second expression of Aber Falls (Wales) about whose inaugural release I wrote a few months back. In the interests of looking at whiskies wherever in the world they come from, these are the two featured for tasting this time.

Let‘s look at Umiki Blended Whisky first. The name means „ocean tree“. I was intrigued by this as it‘s made „ocean side“ and „fused with filtered ocean water“ i.e. desalinated and finished in Japanese pine casks. That gets the brain thinking of the kind of flavour and character that might be in there though you don‘t want to pre-judge things. Now, I tasted a US whiskey once which was trying to be a US homage to Laphroaig which its creator admires. He was using peat from pine forests (rather than pine casks) and I have to say it wasn‘t really to my taste much as I adore Laphroaig. It was also quite young and may have improved with age. Therefore this one finished in Japanese pine was piquing the curiosity. It‘s at 46% vol and not chill-filtered. The blend uses Japanese-distilled malt whiskies with imported grain whiskies but no indication from where. I did ask but was told only that they were from outside Japan. The cask type used for maturation was ex-bourbon barrels for minimum three years and the blend spent less than 6 months in the Japanese pine casks. 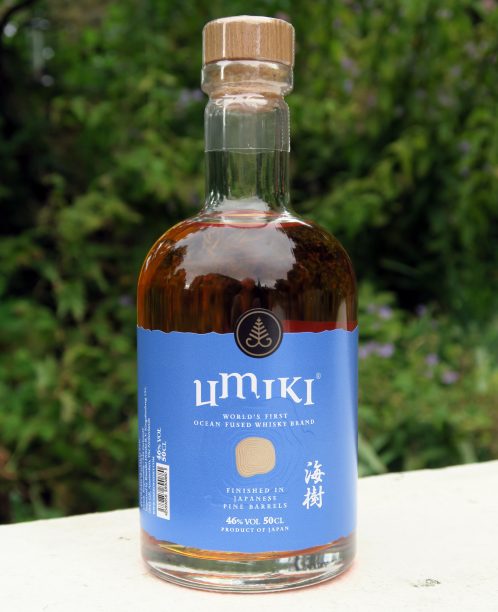 Appearance: Mellow amber in bottle but deep antique gold in the glass. Tears are slow to form at first and sticky, but speed up.

Nose: There is a light touch of pine resin about it in the glass. Quite a sweet and fruity nose too. Fresh sea air. A hint of custard. Some oak wood notes. As it sits, it develops more savoury spice notes as well as sweet. A bit of waxiness. Nothing dominates so it‘s nicely rounded. With water, there‘s a touch more waxiness and the sweet notes come back through. Nosed from the bottle I got sweet wood shavings and a faintly resinous note.

Palate: Slightly unctuous and mouth-coating. Some fruit notes and a little wood. I‘m relieved to say it‘s nothing like the US pine forest peated one I tried some years ago. Indeed, there is no hint of peat or smokiness in this. It‘s just quite light and fresh with some sweetness, a bit of salt and some green pepper. Integrated or uncomplicated (though that‘s probably misleading) are the main words I think of and it would probably make a good base for a cocktail, giving bite and a bit of flavour without dominating.

Finish: Short – medium with a tangy note and finishing quite dry. 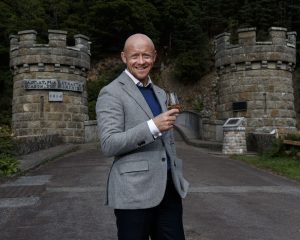 Just this week, Spirit of Speyside (new Chairman pictured here) has announced its first autumn festival dates: 3rd – 8thNovember. You can find out more on their website at https://www.spiritofspeyside.com/festivals/whisky now and tickets go on sale on 17th September. A chance to bring some whisky joy into your autumn diary. Many events are live, in person but a few are virtual. Not all of the Speyside distilleries are participating but there are more than enough to make it are great event and some of those are places you don‘t often get the chance to visit. Also there are food and drink sessions featuring The excellent Dowans Hotel with its wonderful whisky bar (see shot below), amongst others. 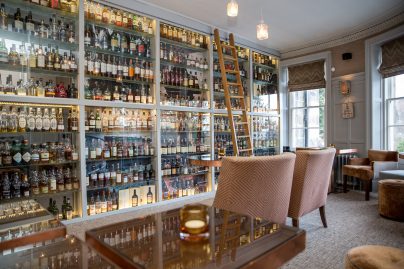 My second whisky for tasting is Aber Falls 2021 Release Single Malt Welsh Whisky, as mentioned at the start. It‘s at 40% vol and matured in a mix of ex-bourbon, sherry and virgin oak casks. All being well, I‘m visiting there in a few weeks and will 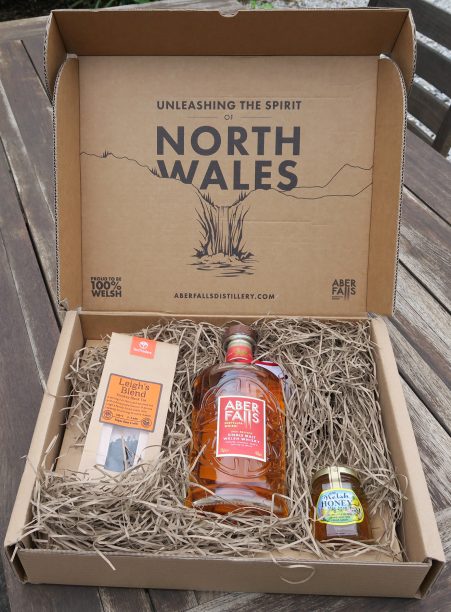 report on that afterwards. I was impressed with the youthful inaugural edition so was looking forward to this. Not all young whiskies are to be dismissed – another fine example is the first Kingsbarns release some years ago which showed really well and promised a lot for the future. The sample arrived in this cute package with a recipe for an Old-Fashioned using all Welsh ingredients. I haven’t tried it yet but will do so before I visit. My Aber Falls 2021 Release notes are:

Appearance: Ripe tawny and gold barley with brass and light orange highlights. Tears quite sticky at first then swifter and quite close together. Indicating youth.

Nose: From the bottle, mainly wood notes, a little golden syrup and a hint of caramel. In glass, fresh and fruity – pears and apples. Some soft oak and vanilla. A little touch of orange oil and soft, sweet spices – certainly ginger. Also some light honey. With water, a little flatter and creamier at first. In addition to the above, some milk chocolate notes and, left to sit for a while, a touch of toffee develops.

Palate: Light/medium mouthfeel. Oak, spices, stewed fruit. Slightly zesty feel as if you‘d chewed the edge of some orange peel. Tongue-tingling ginger; oak wood and tannins. A tiny bit of chocolate, darker than hinted at by the nose.

Finish: Medium length; not too dry with pleasant oak and tannins. Fresh on the palate; some sweet spices and slightly grassy at the very end.

As I said last time, one where it will be interesting to watch its development year by year.

One for the legions of Jim McEwan fans – and fine whisky aficionados – out there. Dramfool is releasing the Jim McEwan 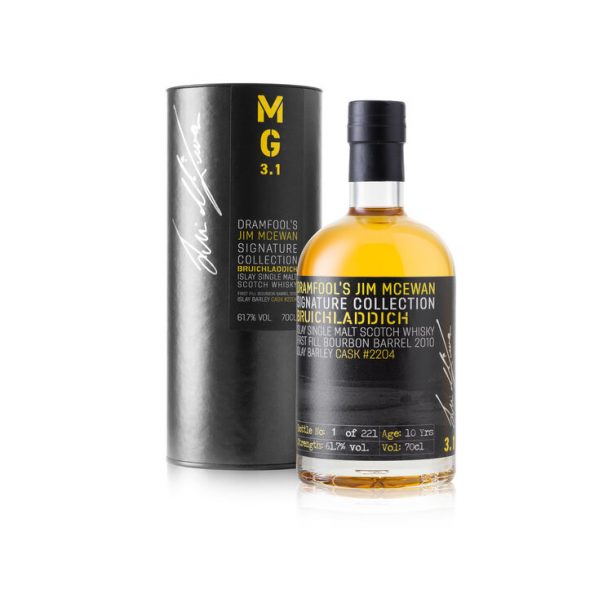 Signature Collection Release 3 exclusively on Dramfool.com tomorrow. They say, „After the continued popularity of our 10cl samples and three 25ml dram tasting packs limited quantities of each will also be available. As last time when they are gone they are gone!“ The three bottlings are: Bruichladdich 2010 Islay Barley, First Fill Bourbon barrel, 10 years, 61.7%; Port Charlotte 2008 Islay Barley, First Fill Bourbon barrel, 12 years, 58.8%; Octomore 2014, First Fill Bourbon barrel, 6 years, 64.7%. You‘ll need deep pockets as they‘re priced at £195, £250 and £275 per 70cl bottle.There‘s also a tasting set of 25ml samples at £60. So get in quick if you want some as there are plenty of folks who like to acquire Jim‘s creations. 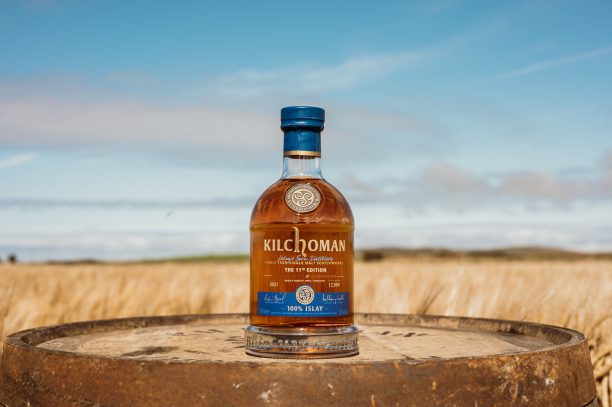 Lastly, a new Kilchoman is launched this week. It‘s the 11th edition of their 100% Islay expression. Their info says, „The 100% Islay 11th Edition was distilled from our 2007, 2009, 2010 and 2011 barley harvests before being matured for a minimum of 9 years in 26 bourbon barrels and 7 oloroso sherry butts.“ There are only 12,000 bottles globally and it‘s at 50% vol., not chill-filtered and with no added colour. A sample is on its way to me so that will be covered in more detail next time. If it doesn‘t reach me next week, I‘ll go into the distillery to try some. All being well (and if the ferry company doesn‘t lose any more boats due to problems with its ageing fleet), the end September column will be posted from Islay or Mull. Last time I went to Mull, some years ago, Tobermory was closed so we‘ll see if I can get in this time!

Meantime, keep enjoying the drams and I‘ll be back later this month with more.