I was going to post this yesterday but received a release embargoed till today so here we are. Quite useful timing too, as a release about some new Glendronachs arrived in the inbox this morning. I‘d say it never rains but it pours but then it‘s always good to have so much info coming in. That expression also describes the current Glasgow weather…

Last time I wrote about Nick Morgan‘s excellent new book about Johnnie Walker but hadn‘t got round to tasting the bottle of Johnnie Walker Celebratory Blend that went with it. Well, I have now and it was a true pleasure. As mentioned last month, it‘s quite a treat now to have blends to nose and taste, much as I love single malts too. I started my whisky career working on a great blend and haven‘t lost my fondness and respect for a good one.

Just in case you‘re wondering what glasses I use for these exercises, I prefer to use a long-stemmed blender‘s nosing glass (I got mine from Glencairn Crystal). Their thistle-shaped Glencairn whisky glass is also very good. An ISO nosing glass for wines is also fine. There are other glasses out there marketed for nosing whiskies but these happen to be the ones I prefer and, for me, it needs to be a glass with a stem or a base that keeps your hands away from the main body of the glass to avoid warming the whisky. 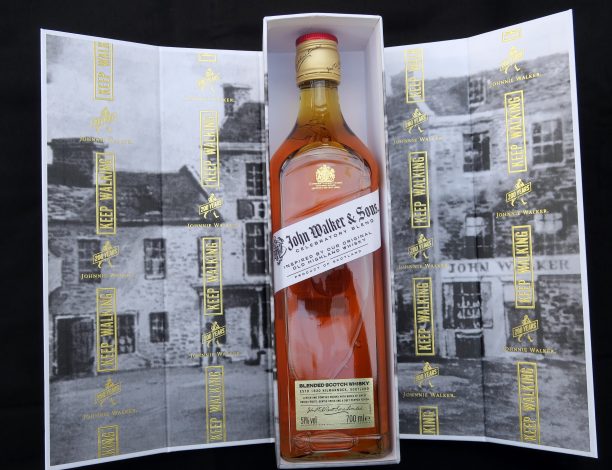 Nose: Rich dried, raisiny fruit – like those you soak to make Christmas cake. Ground almonds which then develop to sweet marzipan; barley sugar and some dried stone fruit; marshmallows/royal icing. Maybe a little orange zest? Lots and lots of layers. With water, more icing sugar sweetness at first. Rich, ripe barley and some cask toast; baked fruits and demerara sugar plus light toffee/caramel notes. Buttery and a tiny hint of sulphur. Definitely sweet aromas rather than savoury in this one.

Palate: Marzipan! It really leapt out at me. Lovely, rich and slightly coating mouthfeel. Peppery notes across the tongue plus sweet and savoury (despite the nose) spices. Lively and fresh, yet deep. Icing, baked apples, a little touch of vanilla and soft oak.

Finish: Quite long with sweet and savoury notes, fading to dryness.

A really delightful blend you can savour for ages. Add to your gift list for whatever festivals/events you celebrate. The information supplied said the whiskies in this blend were those available at the time the Old Highland was being produced. The wording doesn‘t make it clear whether only those of that era were used or whether they are simply inclusions in this blend. I asked the question but so far the answer hasn‘t come back. No matter – it just tastes great and if I find out more, I‘ll let you know.

More on the Johnnie Walker front is a new film about the brand and its 200 year life featuring some untold stories and new perspectives. You can watch the trailer for The Man Who Walked Around the World here: https://youtube.com/channel/UCKdI6o1Rx9BcFaQ1Ul5Xx6A  The full film can be viewed now on Discovery’s portfolio of brands and services and is available to view in the UK at https://themanwho.film. Don‘t be confused bt footage of Iraq at the start. You‘re watching the right thing!

The embargoed release was from Glengoyne who are announcing a 50 Year Old (yes, 50) expression – their oldest ever release. It‘s priced at £22,500 and, in case that makes you choke on your coffee, there is a chance to win one for just a little bit of effort. That will be one of only 150 decanters for the world, so it‘s super-rare and you could have one next year. The theme is all about making special moments with friends or family next year. What you have to do is go to the online ballot page via the website at https://ballot.glengoyne.com/enter and register. 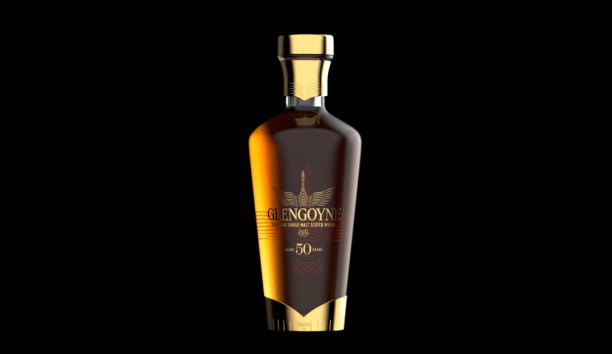 Another four friends or family members also need to form your group by signing up too and describing your perfect moment, ‘‘…for savouring the Glengoyne 50 Year Old together next year. Whether it’s toasting a delayed celebration, or creating an unforgettable reunion, the Glengoyne team will make their special moment a reality, hand-delivering the highly sought-after whisky for one group to enjoy and savour, in good company“. Now surely that‘s worth a try. I‘ve said before that great care needs to be taken with older whiskies as they can have far too much oak influence but Glengoyne wouldn‘t be releasing one if it weren‘t impressive. I have to say, too, that the packaging is just gorgeous (this pic doesn’t do it justice – check out better views on the Glengoyne website). You might have to toss a coin for who keeps it once it‘s empty! The decanter features an engraved goose emblem representing the geese who migrate to the Glen each winter. ‘‘Hidden in the solid oak and gold display box is also a 25ml sample of the 50 Year Old whisky, as well as individually hand-numbered books which are hand-signed by Robbie Hughes, the Distillery Manager.“  If you want to enter the deadline is Monday 14th December to gather your group and submit your moments. 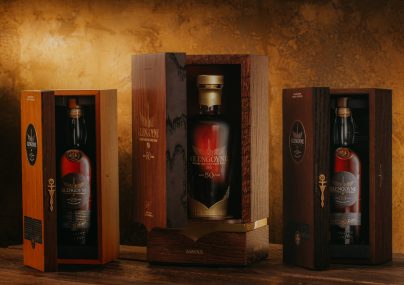 Also announced by Glengoyne and available next week is a new 30 Year Old Glengoyne to sit alongside the 25 Year Old as part of their new Fine and Rare range. Also lovely packaging. It‘s the whisky inside you really want but special things deserve special wrapping.

Next up is a new range from The Glendronach. They have introduced Cask Bottling Batch 18 featuring casks from 1990 to 2009, all at natural colour and not chill-filtered. The colours of the bottlings are so enticing. They vary from 48% alc vol to 61.9%. Rachel Barrie has selected each one based on the character of the contents for your delight and delectation. 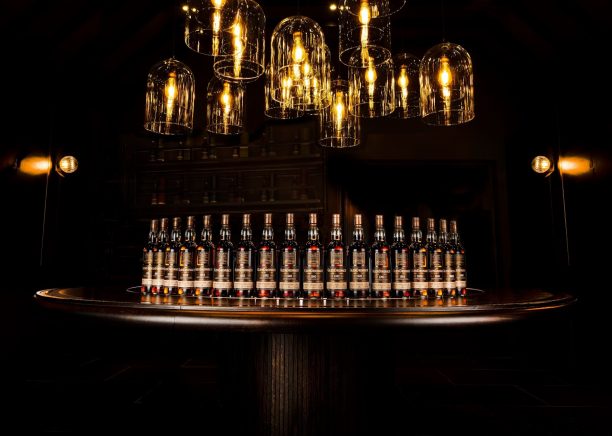 Anyway, the list of cask numbers and their attributes are far too long to list here. If you want more info, drop me a line via this website and I‘ll get back to you. Please note that not all of the casks are available in all markets. The cask types used for maturation are Pedro Ximenez, oloroso or port casks. There are two 30 year olds and some port pipe maturation (Europe only) that is 27 years old as well as one at 26 years old for the US. Quite a number of the 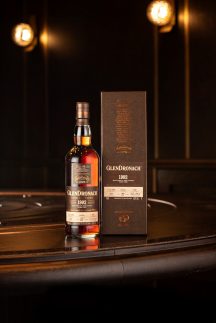 We‘re told that the distillery‘s tasting bar is the only place where you can try all of them by the dram. That‘s a bit sore as we‘re not allowed to be there at the moment and I‘ve been hoping to see the new visitor centre since it reopened. However, I have high hopes of getting up next year when we‘re allowed to travel outside our own restricted areas again. First trip after Covid vaccination, maybe!

This new batch of bottlings is available this month in many markets from Europe to Asia and Australasia as well as Canada. Also in the US from 2021 for the first time since Brown-Forman bought this company. Prices for the various bottlings are from £97 to £861 but price depends on age and cask type. These prices may vary with local duties and taxes. 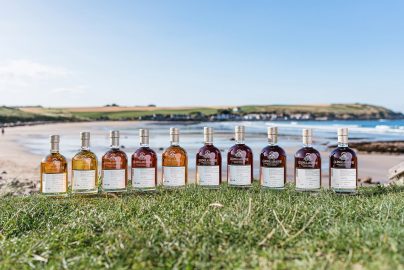 They‘ve been busy at Brown-Forman as this comes only weeks after the launch of the Glenglassaugh Coastal Cask range in October. In case you missed it that‘s a range of 10 and 11 year old bottlings showcasing what has been produced since the distillery was reopened in 2008. The distillery has a dramatic and beautiful northern coastal location and all elements of its place are reflected in the whisky. One to discover if you haven‘t done so already.

Some other news in this week featured the new packaging from Wemyss Malts – a lovely, family owned company 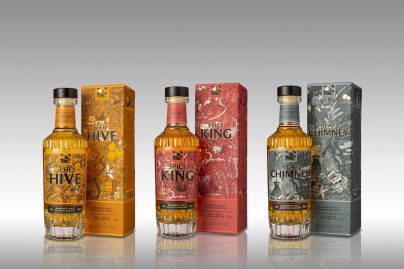 based in Edinburgh and Fife. I‘ve written about a number of their expressions before. They‘ve decided it‘s time to introduce new packaging to highlight the differences in the core range whether sweet, spicy or smoky so The Hive, Spice King and Peat Chimney (each one a blended malt) all appear in new clothes. They don‘t feature distilleries in the core range, preferring to lead on flavour notes and aromas. However, they do have their own distillery at Kingsbarns and have single cask bottlings too from casks they have purchased as well as cask strength and limited editions. Their Velvet Fig is one of my favourites. 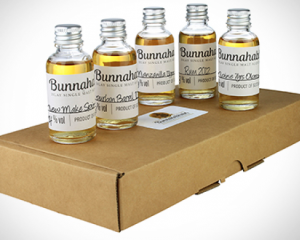 Bunnahabhain is about to do some new online tastings (pic here from their website). ‘‘Coming live from Islay, we hope to see you online soon!“, they say. Find more information on tickets at https://bunnahabhain.digitickets.co.uk/tickets . From £40 per tasting and for UK only so samples can be sent out. 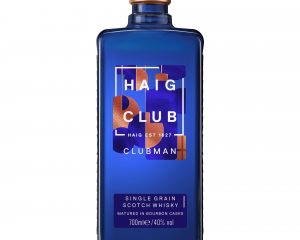 Clubman in the UK off-trade in time for Christmas. The new Limited-Edition Haig Club Clubman is available online and in-store until Christmas at Tesco, Sainsbury’s, Asda, Waitrose, Co-op and other major UK supermarkets, priced around £25. Not every whisky scribe or reviewer had good things to say about this when it was launched several years ago but I kind of like it as it suits the purpose for which it was intended which is largely for mixing and cocktails.

I‘ll be back with you later this month. I’m quite excited about a Bushmills online tasting I was invited to join in tomorrow so may have more to say on that next time. The samples and glasses arrived this week. Hoping to get an interview soon with a particular whisky figure but awaiting diary news.