Well, rather looks like autumn is about to arrive here in the northern hemisphere. Wherever you are in the world, it’s time to check out whiskies for the new season and try new ones you maybe haven’t had before. There have been a number of samples sent to me recently all from the one company so this one is in danger of turning into The Whyte & Mackay Show! However, they were kind enough to send so it would be rude to ignore them while samples from other places are awaited. The recent hot topic in the industry has been the outcry over the new edition of The Whisky Bible. More on that later.

First of all the Cailleach Beira Laphroaig expression from Cask 88 that I wrote about a few months ago has won a silver medal in the International Wine & Spirit Competition. They still have a few bottles left if you’ve read my tasting note and it takes your interest. Or if you’re just a Laphroaig fan anyway.

I held over from last time a sample of Jura Red Wine Cask Finish (Cask Edition – 40% abv) as I was waxing so lyrical about another single malt. It was released back in the spring, initially for two supermarket chains, one in UK and one in France. However, I now have the chance to compare it with Jura’s Winter Edition – a good one to get acquainted with if you live somewhere that the cooler season is arriving. 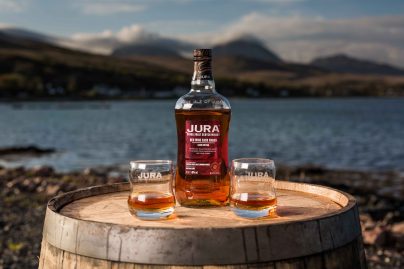 Palate: Medium mouthfeel. A bit of astringency and cranberry juice dryness. Some oak and honey. Herbal and leafy with some tannins and red berries. A slight orange zest strand.

This is a very easy drinking dram and would also be good for mixing and cocktails with its welcoming and versatile flavour array. 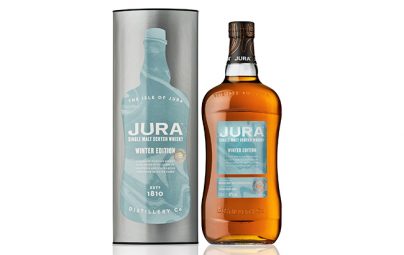 This one has been matured in bourbon casks and finished in sherry casks. It’s currently exclusive to Tesco in the UK and priced at about £45.

Palate: Medium mouthfeel; more oak on the palate than on the nose. Wood tannins, Pontefract cakes (liquorice); some fruit sweetness at the edges but it turns quite dry. A touch of salt too then bitter cherry and a dark caramel edge.

Finish: Medium length; dry with some salt and bitter cherry.

I liked them both and would find it hard to state a preference so I won’t. 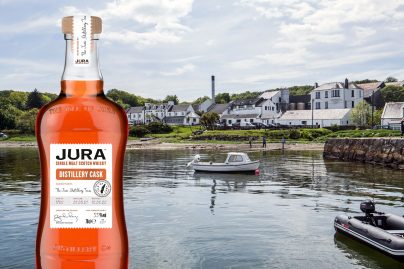 In other Jura news, The Jura Whisky Distillery is auctioning 470 bottles of an exceptionally rare 19 Year Old whisky which has been bottled to raise funds in aid of the mental health charity, Scottish Association for Mental Health.

It’s at cask strength 55% abv and was distilled in May 2001 and filled into Jura cask No 1708 before being bottled and hand sealed in August 2020. All bottles are numbered and are being auctioned now till Monday 5th October via the Whisky Auctioneer site (https://whiskyauctioneer.com ). This follows on from the recent efforts by the W&M team globally to raise funds for mental health charities around the world. Get bidding people!

Another W&M whisky tasted very recently is The Dalmore 12 Year Old Sherry Cask Select. This one has been 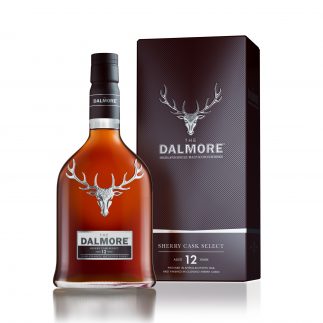 created primarily for major Asian markets – though also available in the UK via The Whisky Shop for £69 – and comes in at 43% abv. It will be available in the US from 2021. Another reason to get those US tariffs removed. Master Distiller Richard Paterson selected three cask partners from Andalusia. and “together they curated the perfect oak casks and created a bespoke sherry blend” of aged oloroso and Pedro Ximenez wines to season the casks, though the spirit began its maturation life in US oak ex-bourbon casks where it quietly matured for its first ten years.

Definitely one to snuggle up with. 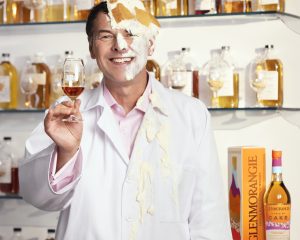 Also in recently was word of a new expression from Glenmorangie – A Tale of Cake. You may have seen pics elsewhere of 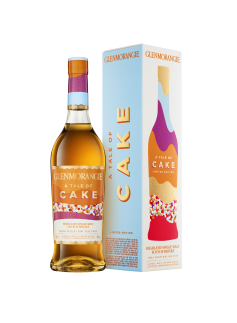 Glenmorangie’s head of whisky creation, Dr. Bill Lumsden with cake thrown in his face. In case you haven’t, here it is! I hope that didn’t ruin any of Dr. Bill’s usual fine tailoring… Anyway, it’s been created with cake pairing in mind (brilliant idea) and was finished in Tokaji dessert wine casks. Dr. Bill has partnered with Dominique Ansel, world renowned pastry chef, who has, we are told, “ …created a series of indulgent cake and cocktail pairings – ‘CakeTails’ – which showcase their unique flavours.” Find it all on the Glenmorangie website. If I can get hold of some of the liquid I’ll try and make pairing recommendations of my own.

So, back to the furore over Jim Murray’s “Whisky Bible”. I’m sorry even to type his name into this column but is the story of the month. Its sexist and unpleasant content was brought to my attention in a piece by whisky writer, Becky Paskin who called him out for comments in the latest edition of this book. She is absolutely right to do so. It reads as sleazy and creepy and smacks of saying something controversial to garner PR attention. Has his book been losing sales in recent years? I don’t know. The opinionated Mr. Murray has long regarded himself as something of a rock star in the world of whisky writing. Certain lyrics of Carly Simon’s “You’re so vain ” come to mind.  Since Becky spoke up there have been others calling for sexism in the whisky world to end. I certainly agree. It’s not how the world works any more – or shouldn’t. I have to say, though, that in all the years I’ve been in the whisky industry, I’ve never had sexist views expressed in my hearing by industry people but I started out with a boss (male) who wouldn’t have put up with that nonsense anyway. Others in the industry may have been less fortunate. I’ve largely found the people welcoming and inclusive. However, I’ve certainly heard of sexism, some of it from distributors, agencies and consumers too. What I have seen, apart from Murray’s offensive phrases, are ads and PR stunts which are sexist and patronising and occasional comments about “a whisky for women” (from people who don’t live in this century). I would hope we’re all rather more evolved now. Regarding Mr. Murray’s “Bible”, I have only one copy, from 2012, which I didn’t buy. It was sent to me for PR purposes and I hope people are not encouraged to buy a copy now to see what the fuss is about. I also wonder why whisky companies kept supplying him the samples to write about. Looks like a lot of that will stop now.

Objectionable descriptions in this book aside, I have a great dislike of books which give whiskies – or wines – scores or star ratings based on the views of only one person. I had the same objections to Robert Parker’s annual wine scores.  I have a mind of my own and would rather try a whisky or wine myself, if possible and form an opinion. Otherwise, a well-wrought tasting note will suffice for me if it intrigues me enough to try something.

Last whisky mention here for this month concerns The Lagavulin Islay Jazz Festival, held every year on Islay – except this year. We’re told, ”This year the Islay Jazz festival has moved to an online format and will be held on Lagavulin and Friends of the Classic Malts Facebook pages on the 3rd October from 7pm BST and hosted in partnership with Jazz Scotland. The immersive event will take guests on a journey through a selection of Lagavulin expressions including the 2020 Jazz edition. Featuring musical performances, the event will be hosted by the new Lagavulin Distillery Manager, Pierrick Guillaume, who will be joined by Ewan Gunn, Diageo’s Global Whisky Master. Together they will explore the 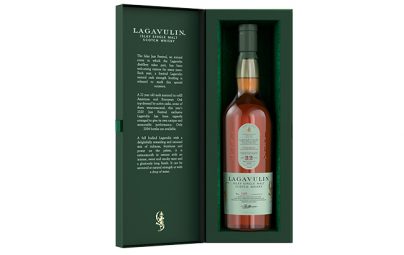 eclectic connection between Jazz and whisky and showcase a selection of delicious whisky cocktails.” I’ll hope to be there. “Lagavulin Distillery will launch a limited-edition 22 Year Old Single Malt Scotch whisky to celebrate 22 years of the annual Islay Jazz Festival, exclusively available to purchase at the Islay distillery from 3rd October.” It’s not a cheapie so you’ll be able to spend your Islay travel and accommodation money on it instead. It will retail at around “£405 per 70cl, bottled at 52.6% ABV with just 2004 bottles available. Matured in refill American and European Oak top-dressed by active casks, some of them wine seasoned…” Find out more about the event on https://facebook.com/events/622098658479476 .

I have two more samples, one blend and one single malt, which arrived recently from Whyte and Mackay but will save those for another time. Just today two anCnoc samples from Inver House Distillers arrived so we’ll look at those in the next column in a couple of weeks.

Lastly, Sue Beatt from The Whisky Ambassador retires from the 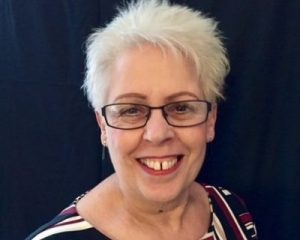 business today. Alongside Jo Graham she has worked tirelessly to set up their whisky courses and attain accreditation, organise the exams and overseas courses and train the tutors and many of the students too.  She may well have some live, in-person training involvement going forward (when that’s allowed again) but won’t be co-running the business anymore. As a freelancer, I’ve enjoyed working with her over a number of years, wish her well with her other interests and loads more time to enjoy life. Hoping to have coffee or lunch when we can do that too!

Meantime, all of you stay safe and covid-free and enjoy those drams.