Well, this whisky and chocolate thing is certainly gathering pace for Valentine’s Day but don’t let it be so restrictive event-wise. As someone who advocated and ran whisky dinners and flavour pairings before they became a more mainstream thing, I can say it’s fun to try at any time. The main one to catch my attention since the last column is from Douglas Laing & Co. who aren’t encouraging chocolate of the eating kind but for drinking. Not just for Valentine’s Day but with desserts all year round. The cocktail recipe they sent out uses their lovely Scallywag Blended Malt (mainly sherry cask-matured). I have everything except the dark chocolate liqueur so I need to get out to a store – if the snow we currently have thaws a bit. Here’s the recipe: 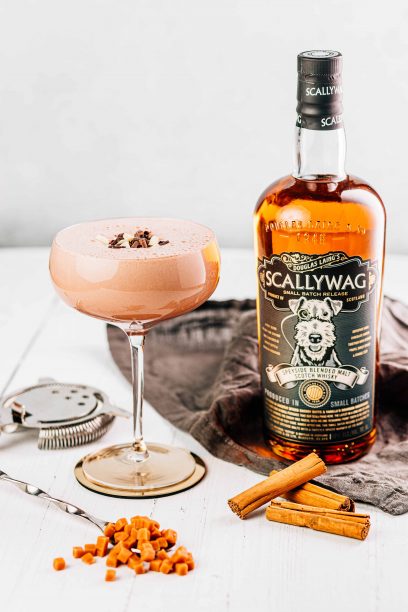 Combine all ingredients in a shaker with cubed ice. Shake vigorously and strain into a chilled coupe glass. Garnish with dark chocolate shavings to serve.

I’m reliably advised – because I asked them – that hazelnut coffee syrup will do fine if you don’t have a hazelnut liqueur. It will also be cheaper. The Scallywag in the pics has no age statement but I have only age statement samples left. It shouldn’t matter.

Then, in addition to the Kilchoman chocolate 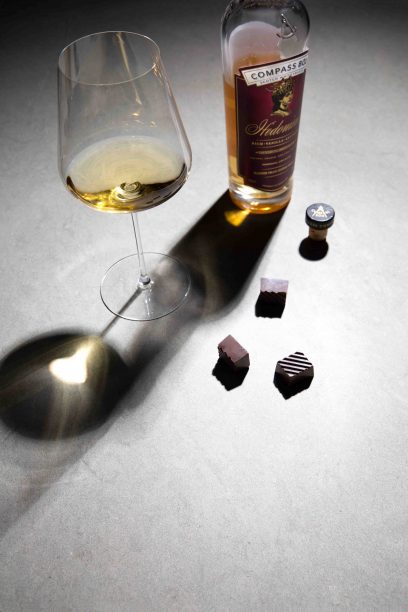 pairing last time, we have a series of recommendations from Compass Box: Hedonism with milk chocolate though also fine with dark, we’re told, especially if there’s salted caramel involved. Then Peat Monster with any chocolate laced with almonds or hazelnuts. They tell us, “White chocolate tames the peat, revealing the orchard fruit and toffee notes beneath the smoky flavour”. Meanwhile, Flaming Heart matches sea salt chocolate which “ heightens the influence of the Sherry-matured whiskies in the blend, while chocolate with caramel, butterscotch, orange or mint flavours will create complex unions with the smoky notes of the whisky”. Lastly, The Spice Tree which pairs well with “Orange flavoured dark chocolate…, but if you use it as an ingredient for cooking such as in an orange chocolate mousse, ensure you don’t use too much astringent zest. Pairing chocolate with The Spice Tree softens the tannic structure and allows the toffee apple notes to emerge”.

So that’s your Valentine weekend sorted and that of your customers if you’re reading this somewhere that bars and restaurants can still open. I’m all in favour of experimentation in this whisky/chocolate arena. Don’t forget that Laphroaig expressions also pair well with chocolate (dark or white depending on what you choose Laphroaig-wise) and a number of Bowmores (often the older, sherried ones) are superb with chocolate desserts or…just chocolate. In desserts you need to be mindful of other ingredients, though, as something might match the chocolate well but won’t work if you dig deeper and find fruits or certain spices and other flavourings. Having said that you’ll usually find a whisky that works well with chocolate and raspberries or strawberries or coconut.

Last time, I mentioned the new Dewar’s 8 Year Old Portuguese Smooth expression and hoped for a sample. Well, one was dropped through my letterbox by the Master Blender herself, Stephanie Macleod, to whom I am extremely grateful. It is indeed smooth and very palatable. My notes are: 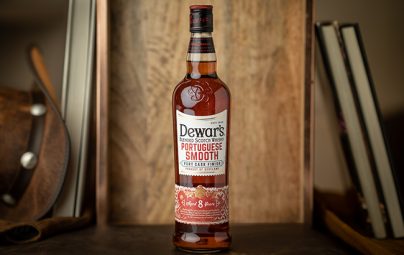 Appearance: Orange marmalade colour and very bright with an amber/pink cast. Tawny highlights. The tears are slow to form and quite close together. They cling to the glass.

Nose: Nosing first from the bottle is a waft of delicious honey and slight spiciness. In glass, soft and slightly sweet; marshmallows; a bit of milk chocolate. Tiny hint of citrus zestiness which fades; some vanilla and a light honey; touch of apricot fruit; wine gums. With water there’s a little more warmth with oak, vanilla and honey persisting longest. Sherbety notes and a tiny bit of sweet spices. Malted barley freshness too and a slight toast as well as a hint of beer note.

Palate: Slips down easily and silkily. Very slightly unctuous. Some spiced honey and dried apricot; A touch of bitter cherry and some sweet barley. Some crunchy red fruit astringency. All nicely integrated, mellow and warming.

Finish: Medium length; sweetness fades to dry and cherry notes then re-emerges at the edge of the palate with some barley flavours.

I don’t have the other two in this range (rum and mezcal casks) to compare but this one is certainly an enjoyable dram of itself.

On blends, I read a review the other week of the Johnnie Walker Celebratory Blend which thought it was a bit rough. That certainly wasn’t my view when I nosed and tasted and hasn’t been since when I’ve enjoyed it just as an evening dram. Definitely, each to their own and everyone’s palate is different. It also depends on when you try it if nosing/tasting alongside others in a professional session. Here at home we recently treated ourselves to a small glass of Royal Salute Snow Polo (grain whisky) and my partner asked if we could have another one. We moved on to the JW Celebratory and that was definitely the wrong way round. I did expect that having nosed and tasted both separately in recent months but this was all in the interests of experimentation. The JW was still good but tasted very different after the soft and toffeed grain whisky. Not how it would have been if it were the first one we’d drunk. Think carefully about the order of whiskies when you’re doing tastings yourself.

Some important bits of Islay news this last week. The first is that Bruichladdich are encouraging us all to go 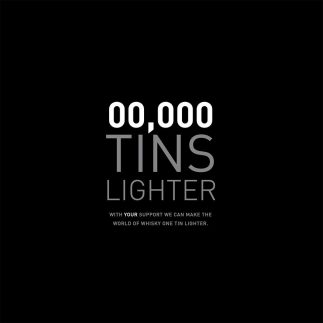 tinless to help the environment in their “One tin lighter” initiative. Now when you buy any of their whiskies from them direct, the bottle is automatically without a tin. You have to choose specifically if you want one. Or, if you do buy it in the normal tin, you could repurpose that in some way. I’ve used some of mine for bulbs, seeds or just single plants which benefit from the width and depth of those tins. They can also look very striking in a garden or greenhouse – even indoors. Or keep kitchen utensils in them on the worktop – always a reminder to have a dram! This fits in very well with their certified B Corp status. They did an Instagram Live session on it last Thursday and it’s available to see on IGTV. 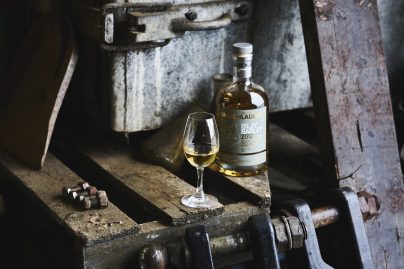 Next up is Bruichladdich again with the launch of their new Bruichladdich Islay Barley 2012. It’s unpeated and bottled at 50% abv as usual. For those who haven’t seen the release or any other trade news feed, the barley is from the 2011 harvest, distilled in 2012. Maturation has been “in a combination of 75% first fill US whisky casks and 25% French wine casks” (we’re not told exactly where from). All of the spirit was matured in the Bruichladdich warehouses on Islay. A sample was offered and gratefully accepted so I’m hoping it turns up soon. I’m excited to try what the talented Mr. Hannett has chosen as suitable for bottling this year. Sadly, my other little bottle of Islay Barley is all finished so I can’t compare them. 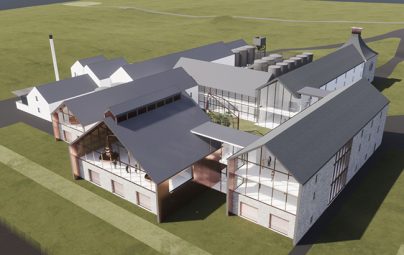 I wrote some while back about Elixir Distillers’ planning application for their new distillery at Port Ellen. Some changes had to be made so that it looked more like the traditional distilleries already there and the revised plans have been approved so the announcement was made this week. I’ve put in a request, subsequently accepted, for an interview with Sukhinder Singh of Elixir Distillers so it’s now down to a matter of co-ordinating diaries. I have a lot of questions already, not just about this new distillery and am looking forward to getting that date finalised and to speaking with him. It’s a hugely exciting project for the island and for the company. I’ve attached here again the architect pictures of the distillery in the planning application so you can see how extensive and attractive it is.

Daft whisky words. Just this week, I read a quote from a company (not in Scotland) who have created a single malt and one of the words used to describe it is “approachable”. What on earth do they mean by approachable?! It’s kind of damning with faint praise. Do they mean bland? Easy to drink (used that myself but it’s not always too helpful either)? Do they imply that other whiskies they make are unapproachable? If so, why make them? Or that whiskies from others are so? All whiskies are approachable to someone. I just feel that other words or phrases could explain their intentions so much better. Another one I’ve seen recently is “double-aged” and there’s also “double matured”. No, it’s aged, or matured, once. Marketing speak sometimes uses shorthand for things its creators understand or to create some mystique but which serves no useful purpose or confuses/misleads the consumer. I’m a marketeer by training myself and I hope I was never guilty of this. If I have been, I apologise. Unaged is another one – all Scotch Whisky in a bottle is aged if it’s called Scotch Whisky. Feel sorry for any inexperienced consumers thinking it’s just moonshine. No Age Statement is the correct term. Rant over.

Lastly, in a nonsense aside, this line in The Drinks Business caught my eye this week: “Changyu, China’s oldest and largest winery, is planning to open a wine theme park in Shanghai North Bund this year.” I suggested, tongue firmly in cheek, to my three of my favourite brand ambassadors that one of their companies should do this for whisky and should we take over Speyside or Islay. Two of them replied in similar cheeky vein but one hasn’t replied. I’m worried he’s seriously considering it…

Enjoy the rest of February. I’ll see you again end of the month for some more news and snippets or maybe an interview. Happy dramming.