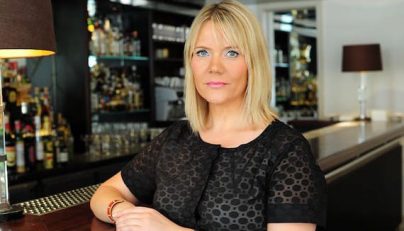 Good news for December starts with word that Kirsten Grant Meikle of Wm. Grant, producers of Glenfiddich, Balvenie, Grant‘s Scotch Whisky, Ailsa Bay, Monkey Shoulder, Hendrick‘s Gin, Tullamore D.E.W. and more, has been appointed to the Board of Trustees of the Wine & Spirit Education Trust as the Worshipful Company of Distillers representative. Kirsten is quite a force in the Scotch Whisky world and has over 20 years of wine and spirits industry experience as well as being a WSET alumna herself. The official quote from WSET Chief Executive Michelle Brampton is, “I am very pleased to welcome Kirsten to the WSET Board of Trustees. Kirsten has valuable skills and experience to bring to the table, especially in helping us to enhance our understanding of the spirits industry, grow the reach of our spirits qualifications and help us to shape our organisation for the future.” I took part in one of the early WSET spirits education courses as a whisky speaker. Putting a bit more emphasis on spirits was quite a step forward at the time and, although that has been developed, it would be good to see spirits more of a feature in the organisation. 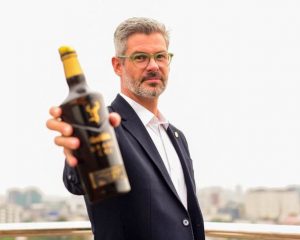 Whisky Magazine Icons of Whisky awards in Edinburgh earlier this month. Mark has won this at least twice before but well deserved again. I get to go judging whisky awards with him and a third judge now and again and know how hard he works for the Glenfiddich brand. If you ever get the chance to go along and listen or participate in one of his events, do it.

At that same awards ceremony, Lochlea Distillery picked up the award for Single Estate distillery as well as gathering two Highly Commended mentions in the Brand Innovator and Sustainable Distillery categories. A fine achievement by the team now led by John Campbell, formerly manager at Laphroaig and who has been a great help to me in the past with Laphroaigs for my Islay Whisky Dinner. I‘ve still to manage a visit down to Lochlea to see how they‘re doing things but might actually manage that in 2023! 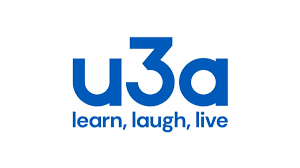 3rd Age, a global learning organisation for our more senior citizens but each branch locally run. I used three whiskies, Aber Falls 2021 Release from Wales, Fettercairn 12 Year Old (owned by Whyte & Mackay) from the Eastern Highlands and Isle of Raasay Single Malt. All fine whiskies and chosen for different reasons. I wanted to use Aber Falls to show how well it stands up against Scotch and how easy it is to drink. There was quite a gasp when I revealed it‘s Welsh. It certainly went down well in the full hall. A friend who organises their events had invited her husband and he pronounced it his favourite of the afternoon, much to my surprise as he‘s a confirmed Laphroaig fan. This expression was matured in two types of sherry cask as well as bourbon and virgin oak. The Fettercairn was chosen as one which would be less familiar to most of the audience as it wasn‘t really promoted as a single malt till 2018 and because I love its tropical fruit notes. Also because it shows off bourbon cask maturation so well and it has a good story to tell in the unique production aspect in the cooling ring round the still. The Isle of Raasay, similarly, would be unknown to many there. It‘s a while since I tasted it and was a delight to experience again its sweet smokiness and creamy notes and admire its beautiful bottle. They use peated and unpeated single malt in it and each version, peated and unpeated,  is matured in three different cask types. Each of the three brands gave me plenty to talk about and explain the effects of maturation. Some good questions from people afterwards too. 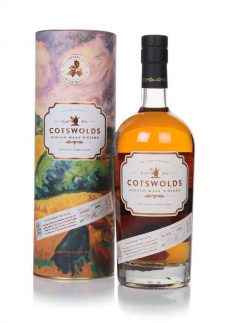 From my backlog of tasting samples, I‘ve now got round to the Cotswolds Distillery‘s Harvest Series Golden Wold Single Malt (England) sample which arrived some weeks ago. It‘s bottled at 52.5% alc. vol. from a mix of ex-Bourbon, STR red wine and peated casks and price will be about £99/£100 which I find a bit high even for a limited edition as it‘s fairly young. I‘ve enjoyed at least one of their whiskies before and this one is also pleasing.

Appearance: Light amber with brass highlights and a tawny tint. Tears fairly slow and quite close together. We know this will be a youngish whisky as the distillery opened only in 2014.

Nose: Sweet notes first – barley sugar and light caramel. Soft oak, honey, light fruits, vanilla and soft, sweet spices. An enticing nose. Like opening a pack of Dolly Mixtures or marshmallows. A touch of peach too. With water the icing sugar/marshmallow sweetness is to the forebut also a drier, woodier note. A bit of powdered ginger too. The peat is very subtle and you could almost miss it.

Finish: Short – medium, herbs and vanilla and, as with many sweetly scented whiskies, rather dry.

Other samples I have had waiting are the three new Warehouse 1 expressions from Glen Moray. Only one here today because of space and will 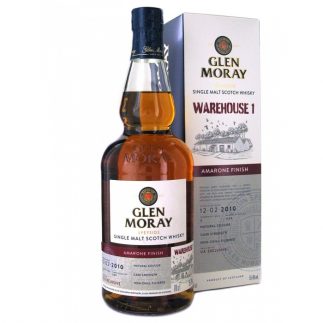 cover the other two next time. This one is The Glen Moray Warehouse 1 Amarone Finish (55.4% abv). It was distilled in February 2010, there are 1,194 bottles and it‘s priced at around £79.95. No indication as to how long it was finished in the amarone casks. If you‘re unfamiliar with the term amarone, it‘s a feature of some Italian red wines from Valpolicella where the grapes are partially dried before pressing, resulting in a richer wine (it‘s delicious and great with turkey or other or game birds for Christmas dinner).

Nose: Sweet, fruity notes and warm, sweet spicing straight out of the glass. Dark fruits and a hint of plain (dark) chocolate, a little like dark chocolate cherry liqueurs. Sweet warm, damp oak, earth and vanilla.Some slight honey as it opens out and toffee apple too.

Palate: A peppery zing even with the addition of water to make it about 50:50; oak and again some dark fruits and a dab of plain chocolate. Slightly chewy with a little coffee ground bitterness too.

Finish: Long and zesty with a dry, slightly oaky and herbal finish plus a rear note of slight dark chocolate / black coffee bitterness.

Another dram I‘d happily have again and I‘m really looking forward to trying the other two in this series which are Amontillado sherry finish and one fully matured in Oloroso casks. Next time, people.

One thing that came in my drinks trade news feeds recently is mention that a US distillery has set up a „whiskey webcam“. They are offering people who purchase one of its bourbons the chance to watch their whiskey age by means of a live webcam inside the barrel all the way till it‘s ready for bottling which could be from 4 – 6 years as buyers can choose at what age and proof (% abv) they want the bottling done. They also get annual samples from their own barrel. The company‘s president is quoted saying, “Can you imagine the anticipation of taking that first sip after six years of watching your whiskey age? That’s the experience we are excited to offer.” Personally I‘m inclined to think that it‘s even slower and duller than watching paint dry… The webcam package costs $149 and buyers can access the feed via QR code. I‘m wondering how many people are daft enough to pay for this. 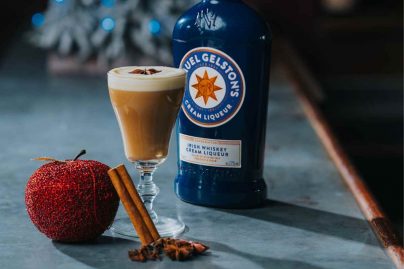 Last whiskey to get a mention this time and on a more positive note, as it‘s festive season, is Samuel Gelston‘s Irish Whisky or, in fact, its Liqueur. Gelston‘s is running a new campaign – Gelston‘s Gold Rush after the star on the bottle – featuring gold-inspired cocktail recipes. I prefer the liqueur to the blend. It‘s just personal taste. The cocktail recipe given is:

Double cream to float on top.

Pour all ingredients into a steamed Irish coffee glass and layer the thick cream on top with a spoon (pour it down the back of the spoon). Garnish with star anise.

They suggest making the spiced syrup with one cup of brown sugar and one cup of water with your preferred spices. Mixologist, Emily Doherty, who created this, used cinnamon, cloves and star anise. I could really get into this one!

So that‘s it for the first December piece. I‘ll be back at the tail end of the month and the year with the last one for 2022.

Till then, happy dramming and a very happy and restful festive season to all, regardless of whether you mark it or not.