I hope those still in lockdown, whether a more relaxed version or not, are still doing okay. Some of our distilling and other friends are still working hard online to bring you new information and keep you entertained. Others are still launching fine new expressions of their brands for you and customers to enjoy now or when we can move about more freely.

Two expressions which came my way after the last column are from Douglas Laing & Co. We have Epicurean Rivesaltes and Rock Island Sherry Edition. Let’s look at Rivesaltes first. 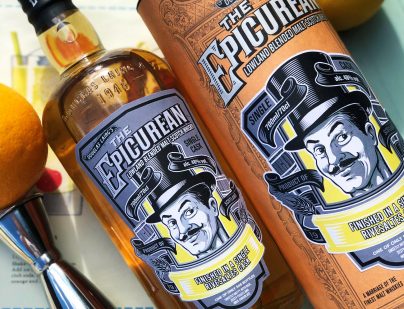 Just as a reminder, Rivesaltes is an area of south west France, within Languedoc-Roussillon, known mainly for its sweet wines often made from the muscat grape (Muscat de Rivesaltes). However, other sweet wines made there are not restricted to muscat and use simple the Rivesaltes appellation which can use white and red grapes for these sweet wines.

Douglas Laing’s latest Epicurean single cask offering is, as usual for them, without chill-filtration. The natural colour of the spirit comes from the Rivesaltes-seasoned single cask used for maturation and only two casks have been bottled for release. In this series, through The Epicurean, DL seeks to demonstrate that flavour is created throughout the Whisky-making process but most significantly during the interaction between the spirit and the oak wood used for maturation. We are told, “The Epicurean Malt was first matured in premium American Oak wood barrels before being re-racked into hand-selected Rivesaltes single casks for a second maturation period of more than twelve months.” At DL they believe The Epicurean Lowland malts are particularly receptive to cask finishes. My tasting notes are:

Finish: Medium length; Dry at first but cereal sweetness too and a little citrus bitterness (not sourness) at the end. Left with lingering cereal flavours.

This new Rock Island expression is an amalgamation of single cask single malts from some of our islands including Islay, Arran, Jura and 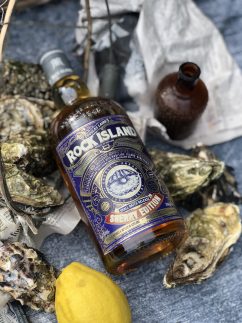 Orkney. That’s quite an array of potential flavour and character. The release says the whisky “spent the final stages of its long maturation in specially selected Spanish Sherry butts”. The DL team reckon Rock Island Whisky is “the perfect accompaniment to fresh seafood” which is why they launched it on National Oyster Day (who knew?!) on 5th August. I’m not an oyster fan so can’t vouch for that but will try to persuade my godson, who farms oysters in the Middle East, to try them together if he can get hold of a bottle. My own notes:

Nose: From the bottle – earth and smoke. Once in the glass, smoke, peat, a bit of char and sweaty wool sock. Richly toasted barley and salt air. Some spice and barley sugar. Oak notes and still earthy. With water, more creamy oak notes and softer smoke. Very balanced and mellow nose. A bit more barley sugar sweetness. A touch medicinal but not strong. No sulphur despite the sherry cask. Deeper smoke and fruit aromas. Some seaweed/vegetal notes plus a bit of raisin but mainly an attractive nose of creaminess and soft smoke.

From the empty glass more of the fruit and some dark chocolate. Maybe even some used espresso coffee grounds.

Palate: Slightly oily mouth feel with smoke, tar and char but not throat-catching. Quite astringent and drying but also rich cereal sweetness. Some smoked salt and tingly on the tongue.

Finish: Very long; smoky, richly toasted barley and some saltiness. Earthy. No obvious sherry – it just mellows everything out nicely.

In both instances I nosed the whiskies in the freshly opened little sample bottles before pouring into the glasses. I also nosed the empty glasses a short while afterwards. You can get new aromas or enhanced ones from this so give it a try whenever you’re nosing whiskies. 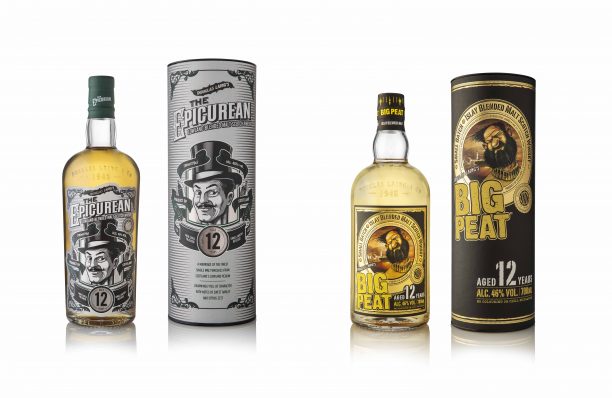 Just this week, Douglas Laing & Co. announced another two expressions. God, do these people never sleep? These guys have not been idle during lockdown! One is to join the Big Peat series and the other forms part of The Epicurean Lowland malt stable. Big Peat 12 Years Old Islay Malt is a blend of single cask single malts (therefore a blended malt), as usual without colouring or chill-filtration. At 46% abv it is the first ever permanent age statement release under the Big Peat name. The Epicurean 12 Years Old is a blend of single cask single malts distilled in our Lowland region. This is also a new, permanent expression without colouring or chill-filtration, at 46% abv. Both whiskies are intended for specialist spirits retailers globally with prices around £55.00 and £50.00 respectively.

Fancy joining in a World Record Online Whisky Tasting attempt? Well, you can do just that on Friday 4th September 2020 at 20:30 (UK 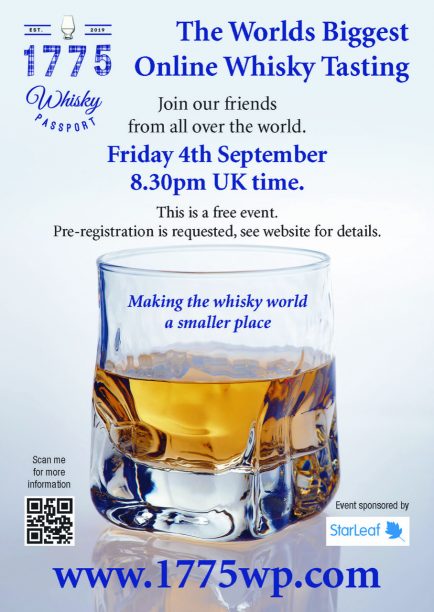 time). “Just sign up to take part in helping break the record for ‘The Most People Viewing a Whisky Tasting Online’ on Friday 4 September, from the comfort of your own home, from anywhere across the globe, whilst also enjoying a few drams yourself!”, says the invitation which came to me early this  week. It’s been set up by Graham Blaikie, bar/restaurant owner just outside Edinburgh and, like me, a past president of the 49 Wine & Spirit Club of Scotland. It’s to tie in with his new whisky club venture ‘1775 Whisky Passport’. They want to exceed the current record of 1,500 and get 3,000 of you signed up  to break the world record with the club founders On the night, you can join in virtually – and free of charge – to watch the broadcast live online, with a 30-minute launch show from their whisky HQ . There will be a tasting session where you can participate from home by purchasing the tasting pack in advance from https://1775whiskypassport.com/shop/ (available to purchase to those in Europe too) but time is tight for ordering outside the UK now so you can simply enjoy the fun and informative chat about the selected whiskies whilst enjoying one of your own drams.

Graham told me, “We felt there was a real space for an organisation that could bring whisky lovers together, in a more fun yet still informative manner.  Where we treat our members like best friends and friendships evolve through our shared passion for our national drink.  Every Friday, we will run our virtual whisky tasting at 20:30 (UK time) and we hand pick a selection of malts to explore together and encourage our viewers to interact with us.For those in Europe wishing to try our selected whiskies, these can be pre-purchased on our website. And, as we move out of lockdown, we plan to have good old fashioned ‘round the table’ tastings with special guest appearances from Master Blenders.” There will be some other benefits too. Plus, “for your £25 annual membership fee, we will also give you a 1775 whisky glass, miniature dram and plant an oak tree on joining.  We do hope you will join us on 4th September to break the world record for the Most People Viewing a Whisky Tasting Online.” Go on, be part of it and help them break the record.

I’ve recently reported on a Whyte & Mackay initiative, Whyte & Mackay Cares, where a number of the HQ team and their colleagues round the world have been “travelling” round the globe from W&M HQ in Glasgow to Dalmore in northern Scotland by walking, running or cycling in their own localities to raise money for mental health charities (so important in lockdown) and virtually visiting certain cities along the way. In Dubai, colleagues iare taking part in the challenge, committing to cycling, walking and running over 1000km in humid conditions – reaching over 40 degrees C. Brave! The exercise of two laps round the world ended this week and I await the final tally but last I checked the team members were just 200 miles short of their Dalmore Distillery destination (nearly 50,000 miles). They have raised nearly that same amount in £ for their chosen charities. I’m sure they will have reached the £50k target. The chosen charities were Scottish Association for Mental Health; Canadian Mental Health Association; Mental Health America (U.S.A.) ; The Syin-Lu Social Welfare Foundation (Taiwan); The Mental Health Association of Hong Kong; Al Jalila Foundation (U.A.E.); The South African Federation of Mental Health; Ingenium (Mexico) . 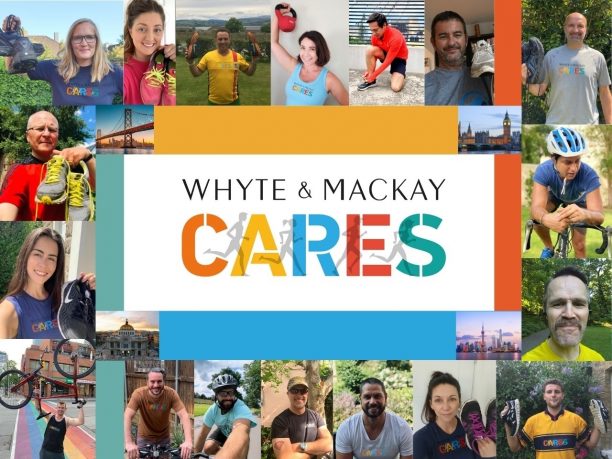 Well done for a fantastic effort, people! Also, their Whyte & Mackay Light which I wrote about last year has recently won a gold medal in the International Wine & Spirit Competition in the Light Spirit Drink category. Double thumbs-up. 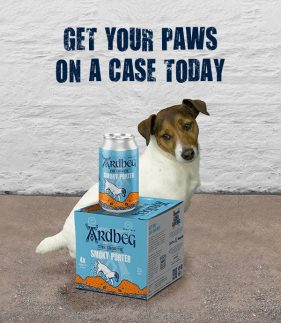 You may have read in other media (as it was trailed a little while back) that Ardbeg was involved in the brewing of a special limited edition beer with Williams Bros in Alloa, Scotland, The Shortie Smoky Porter. It was finally available just this month. Boy, did that sell out fast! When I logged on and saw the e-mail it had been out only about 90 minutes but the outlets I looked at were sold out or simply showed no availability (advance sales?). None for my wee brother, then. This one was also a charity fund-raising exercise where Ardbeg was asked to develop a special recipe for Brewgooder’s Global Gathering campaign, “a unique project launched to help achieve their goal of providing thousands of people with clean drinking water in Africa – all through the power of beer!” I’ve tried to find out how much was produced in total but no word back yet. Congratulations to those involved for a great success. By the way, there’s a limited edition Ardbeg 19 Year Old coming out in September too. Another good thing to look forward to.

Last for this column is to say that the media release came out today (28th August) to announce Diageo’s Special Releases selection for 2020. Given that we had Primo & Ultimo Collection launched recently, I wasn’t sure if we would get Special Releases this year but here we are. As the release just came out there are no samples but we live in hope! This year’s selection is by Master Blender, Dr. Craig Wilson and the whiskies are: 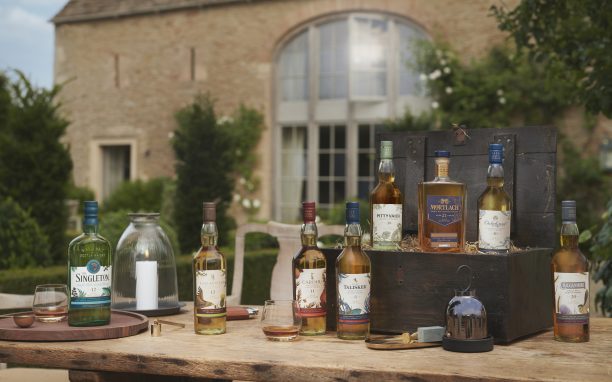 If I do manage to try any, I’ll report back. These whiskies are available from autumn 2020 from specialist retailers in Europe, the USA, Canada, Australia, South Africa, selected markets across Asia and in airport duty free.

So that’s us for late August. I’ll be back around the middle of September just before I take two weeks off. Not going anywhere but it will be a couple of weeks off from computer screens and I’ll be back in time to do a late September column too.