Scallywag Tasting – with Chocolate?; Juras on Taste; Edinburgh Cocktail Week Is On!; Whisky Distillery Ownership – Does It Matter? 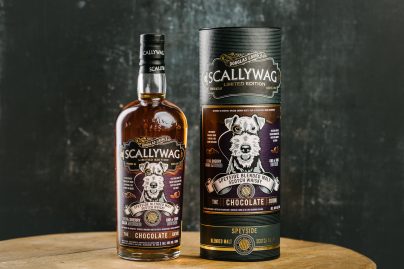 First item for this column is a review of a sample sent from Douglas Laing & Co. It‘s their new Scallywag Chocolate Edition (48% vol) which arrived on World Chocolate Day (7th July) but this is my first column since then. It‘s a blended malt, from only Speyside whiskies and from single casks (mainly sherry) and no added colour or chill-filtration. Now, I‘ve mentioned other Scallywag expressions linked to chocolate before but now they‘ve gone all out to produce one that‘s meant to be a specific match. Before we get to that, let‘s see how it noses and tastes.

Appearance: Tawny gold with brass highlights. Tears quite slow to form and slightly clingy so some more aged whiskies here.

Nose: Lovely dark red and black fruits and dark chocolate at first. Aromatic oak casks and earthen-floored warehouse. A little touch of sulphur. Rich, baked honey. Left for a short while, a touch of varnish and more chocolate. With water, slightly waxy notes and deep floral notes amongst the honey.

Palate: Quite a viscous/luscious mouthfeel; very tongue drying with hay and some „green“ notes. Some coffee grounds and oak tannin astringency. Toastiness (not smoke) in the whisky is brought out by chocolate and the whisky brings out the chocolate sweetness.

Finish: Long and dry with some astringency at the end. 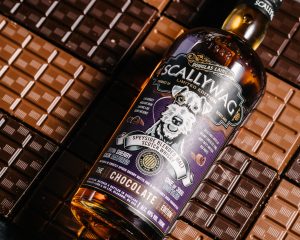 worked really well. I can imagine using this with chocolate mousse or a chocolate tart. A chocolate and hazelnut or walnut combination would also be good. An actual chocolate Scallywag dog would be nice if Douglas Laing and their chocolate partner want to think about it!

As ever, this is available only from selected specialists at around £55/64 euros per 70cl bottle. Only 3,000 bottles were produced and I‘ve still to buy one so I‘d better get a move on. We‘re told further, „In tandem with the new launch, the award-winning Speyside Malt has partnered with luxury Chocolatier – Sugarsnap – to create a set of bespoke Scallywag Whisky infused chocolates… The partnership is set to elevate Scallywag’s positioning as “the ultimate chocolate companion” by showcasing how first, the chocolate inspired the Whisky, and now, how the Whisky has come full circle to inspire the chocolate.“ Well, I‘d say they‘ve done a wonderful job. There‘s also a lot of social media activity round this for another few weeks, primarily on Instagram – @scallywagwhisky .

Before we get on to more tasting notes, as some places try to get back to something more like the life we had pre-Covid, it‘s great to have something to look forward to. If you‘re based here in Scotland and near Edinburgh or you‘re allowed to travel to us in the autumn from outside Scotland, Edinburgh Cocktail Week is on and over 100 bars have signed up for it. The dates are Monday 11 – Sunday 24 October so it‘s actually two weeks and there will be a cocktail village as well as other events to be announced later on. Find out more at https://www.edinburghcocktailweek.co.uk/ . If you want to visit Edinburgh but haven‘t quite made it or decided your holidays yet, there‘s an incentive. We need to support our bars now that they‘re opening up more.

barrels. This one and its stable sister, Gladstone Black Axe, came with an interesting story. It seems – and as a Scot I was unaware of this, so shame on me – that William Gladstone, one of the Prime Ministers to Queen Victoria, claimed „There is not a drop of blood in me that is not Scottish.“ Apart from passing legislation that helped Scotch Whisky, one of his favourite hobbies was tree-felling…with an axe. Hence the name of a few whisky expressions from this company whose founder is William Gladstone‘s great-great-great grandson. We‘re told these blended malts are from 14 different Highland and Islay distilleries though whether that‘s across them both or whether each one has content from 14 distilleries is unclear. The company‘s stated aim is to encourage people to try whisky in cocktails and as a mixed drink. Pushing against an open door, I‘d say as the world has become so much more open to that for a number of years. So let‘s look at The Gladstone Axe American Oak.

Appearance: Ripe, rich gold, nectarine flesh colour. Tears quite swift and close so there are some more youthful whiskies here.

Nose: Initially oak sweetness then some honey comes through; freshly cut grass and lemon zest. A litle bit of vanilla (to be expected from bourbon barrels) then stewed apple. With water, it‘s flatter at first then creamier; a waxy note like new candles. A touch of bottled lemon juice and light, dried stone fruit. There was more too it than I first thought but the nose does fade a bit if left a while in the glass. 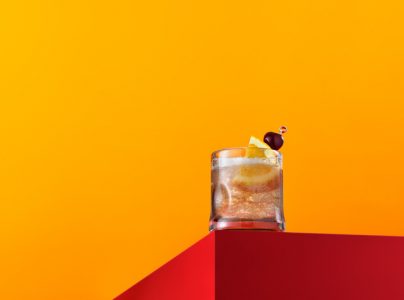 As some cocktail recipes were included in the accompanying book, here‘s one for you to try (pic is above).

Take a tall glass, add some ice and pour in 1.5 parts The Gladstone Axe, 1 part lemon juice and 0.5 part simple syrup. Stir well, top up with soda and garnish with Hotel Starlino maraschino cherry and a slice of orange.

Last tasting note this time is for a Jura. I was sent a pack of three samples, one of which, Tide, was covered some time ago. The other two were samples of bottlings in support of the Jura Music Festival. One is this year‘s Feis Ile bottling (still on sale on their website) and which I‘ll cover next time. This one is from the same year – 2002 – but distilled in March of that year and it‘s 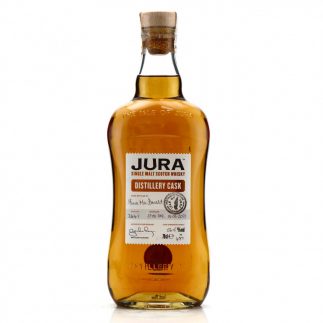 distinctly peated, Jura Distillery Malt from 27/3/02 and 56.5% vol. It was bottled in 2019 at 17 years old in time for Feis Ile 2019. We know Jura does have a certain amount of peated production annually but I hadn‘t tasted one this strongly peated before.

Appearance: Ripe barley gold with a greenish tinge and brass highlights. Tears slow to form and run and quite widely spaced.

Palate: Very smoky and peaty with plenty of char. Richly toasted barley but also sweetness from the barley and the oak casks.

Finish: Long, smoky and peaty. Tar and antiseptic aftertaste but with a light, sweet edge.

An attractive nose but not the type of Jura I prefer with its fruitier and vanilla custard aromas and a less smoky palate, though Juras with some peated whisky in them are a tasty option. I do like peaty whiskies but this one didn‘t float my boat on the palate. Good nose, though. The Feis Ile 2021 was from the same year and isn‘t a peaty one so I‘m looking forward to trying them side by side, though not for comparison.

A point to debate as we finish up. One of our Scottish newspapers ran a piece this last week indicating that two thirds of Scotch Whisky distilleries are owned by companies outside Scotland. It was in a daily digest feed to my inbox and I didn‘t have access to the whole article, just the first paragraph. What I am wondering is, does it matter? The whisky has to be distilled and matured here in Scotland. Single Malt Scotch Whisky cannot be exported in bulk. Blended whisky can be exported in bulk to verified bottlers (verified by Her Majesty‘s Revenue & Customs) for bottling in market. Teacher‘s used to do this (don‘t know if they still do) in Brazil and India where it gave them leading market shares due to availability and popularity because it brought work to those countries. The bottling facilities were carefully monitored. Years ago at The Marketing Society in Scotland we had a debate about whether it mattered whether Scotch whiskies were marketed – or at least whether marketing was directed – from Scotland. I remember Dr. Nick Morgan from Diageo spoke eloquently to say that it didn‘t and the vote went decisively in his favour. Certainly at that time, I think the Johnnie Walker marketing team were based in Amsterdam. For the reasons surrounding the production regulations round Scotch and what and how it can be exported leads me to think that it doesn‘t matter as long as those owning the distilleries and the brands are sensitive to whisky‘s origins and traditions, as well as to those who actually make the brands – and if they do a good job in promoting it to the world. I‘m sure others will disagree with me maybe because of where some of the revenue from sales goes but the industry‘s jobs in Scotland support many other jobs in their local communities and some of the money does stay in the UK. I had a study about that done years ago by the Fraser of Allander Institute. In my experience all companies owning distilleries and Scotch brands are very careful in their respect for its origins, authenticity and history. I‘d be interested in hearing your views.

Till next time, keep sipping and enjoying the drams.