We‘re starting this time with a couple of whiskies mentioned last time but which hadn‘t been tasted. 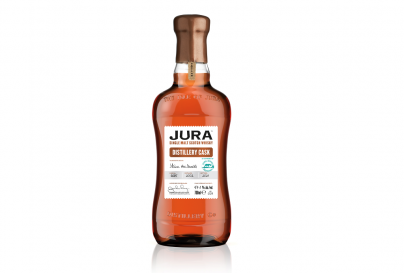 The first is Jura Distillery Cask which was bottled at 57.1% in May this year in time for 2021‘s virtual Feis Ile/ Jura Music Festival. This one was distilled at the end of October 2002 and, a few weeks ago, was still for sale on the Jura website. It is now showing as sold out but you might find one in a specialist shop or an auction. The original price was £145 with £25 of that going to the Jura Music Festival. I was looking forward to this as I was less keen on the peaty Jura (bottled 2019) featured last week. This one was matured for all its cask life in a refill ex-sherry butt. That means it‘s possible that the most overt sherry influence will have gone into the whisky matured in the cask before this spirit was filled into it in 2002, dependent on how long it was in there. It‘s definitely present in this filling but a bit more subtle than if it had been matured entirely in fresh-fill sherry wood.

Nose: Quite rich at first with some toffee/caramel and enticing dried vine fruits. Some vanilla and a tiny fleeting bit of sulphur. Fresh florals and a hint of pineapple. With water a little more wax notes and the oak comes through more. Orange oil. As it sits it takes on a „drier“ note – ginger and other spices and not so fruity.

Palate: Slightly unctuous mouthfeel; spicy with a hint of mint and some sweets called Floral Gums that I used to eat as a child. Some oak astringency and a touch of orange oil as on the nose. Some sea salt and rich barley with a touch of almond.

This one is much more my preferred Jura style. What I am curious about is the sample in my bottle is rather paler in colour than the bottle shots provided but lighting can do many things! Still tastes good though. I am also assuming there is no added colour to a special expression like this.

was the turn of their American Oak expression. This one contains more Islay malt though it isn‘t overtly smoky i.e. neither a nasal assault nor a throat-catcher.

Appearance: Rich, bright gold with some orange tones. Quite oily when swirled in the glass. Tears quite quick and close at first then slower and more widely spaced.

Palate: Medium mouthfeel with slight unctuousness, some astringency and roasted barley grains; a little bit of cask char and zingy, peppery notes on the tongue. Light smoke at the back.

Finish: Medium length and dry with toasted malt, some light smoke and a bit of cask char.

I haven‘t wanted to write about it till now but  June saw the sad passing of Iain Henderson, wonderful distillery 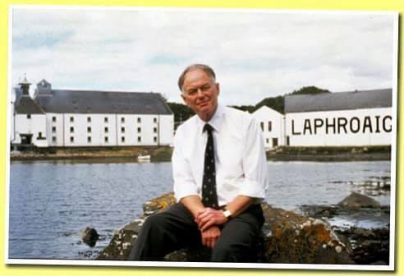 manager and my former colleague. I’d hoped to use one of my own pics of him here – standing on the Laphroaig malting floor, in full flow to visitors, just as many will remember him – but this system won’t accept such an old shot. Before his arrival on Islay, Iain had worked at a number of other distilleries and, after Laphroaig, went on to take charge of Edradour near Moulin in Perthshire and then St. George‘s in Norfolk before finally retiring back to Fife with his beloved wife, Carole, who died in April this year.  They made a formidable team at Laphroaig with Iain leading operations and Carole looking afer the company visitors we took there amongst other work she did. He also trained people who went on to be managers elsewhere. I loved hearing his pronouncements on whisky like “Ireland may have invented it but here we’ve perfected it.” Or some of his rafts of stories such as the time some Japanese corporate visitors, who thought he was hiding some great secret about whisky-making, went missing and he found them in the still house measuring distances from wall to stills there just in case that was part of the secret. Or the head of the Russian military, who visited with his retinue and drank so much he had to be carried back into his helicopter and was no longer head of the military some short time later… 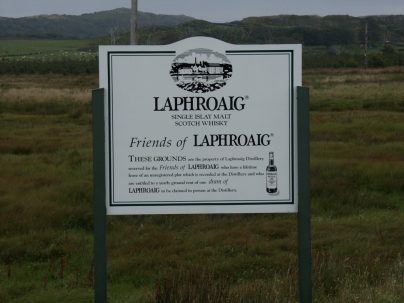 Some of you may know I was fortunate enough to be its marketing manager for some of the time Iain was in charge at Laphroaig and I was able to work on developing  Friends of Laphroaig with him and others. Many people won‘t know that, without Iain, we wouldn‘t have Friends of Laphroaig which now has some 1 million members worldwide. It‘s a very fitting memorial to a great man, a great distiller and the best distillery manager I‘ve ever met or worked with. When FoL first started he was creating handwritten letters to the Friends which were printed off and sent out. The first Laphroaig 15 Year Old and Quarter Cask were launched under his watch. He was also a pioneer in the whisky tourism and visitor centre arenas, building a visitor centre at Bladnoch and advocating whisky tourism in his other workplaces. He was supportive of me and Helen Arthur setting up Scotland‘s first ever specialist whisky tourism company back in 1997. Two of his three sons work in Scotch Whisky distilleries. Iain was made a Keeper of The Quaich for his dedication to the industry and an appreciation of his life in it will appear in their autumn magazine, for those of you who have access to that.

A couple of charity announcements just this week. The Scotch Whisky industry has a lot of charity involvement through the individual companies and other bodies.

First of all, who would be mad enough to swim near the Corryvreckan whirlpool between Islay and Jura? Alex and Nick 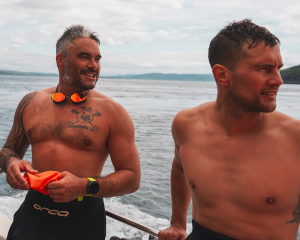 Ravenhall would. They‘re brothers who grew up in New Zealand but are now based in the UK. Nick is the Managing Director for Holyrood Distillery in Edinburgh, whilst Alex is Head of Events for Atom Brands, whose clients include the whisky bottling brand Boutique-y Whisky Company. As both work in/around the drinks industry, they „decided to tackle the global water problem in the sphere of whisky and in 2019 already raised $11,000 for Sea Shepherd“. This Sunday, 1st August they will attempt to swim across The Corryvreckan with bottles of whisky strapped to their bodies to raise money for Sea Shepherd New Zealand.

What‘s Sea Shepherd, if you‘ve never heard of it? Well, the release says the brothers „founded Whisky and Waves, an ocean awareness charity, to call attention to the vulnerability of the earth’s beautiful waterways. They united on creating a campaign that would encourage a wider global responsibility for overfishing, poaching and environmental waste which have all destroyed marine populations and polluted the seas. The pair felt a special calling to work with Sea Shepherd on this project, whose charity work includes protecting Maui’s dolphins endemic to New Zealand. Teaming up with Signatory, one of the UK’s largest independent whisky bottlers, the drams will be used to create bespoke cask whiskies, which will be sold later this year to raise money to help protect and conserve New Zealand’s waters.“

The Scotch Whisky industry takes great care over what it puts into the sea and is highly regulated in this area so it‘s a nice connection. Our world waters are all connected, really. It‘s a worthy cause to support when the whisky is ready for sale and I‘ll mention again then. I did ask if there will be any live or slightly delayed footage on the web and there will, apparently, be a boat following them during the swim but didn‘t get an answer to the footage question. If there is any more news, I‘ll update via Twitter or elsewhere. And good on Signatory (also owners of Edradour Distillery) for supporting them in this endeavour. 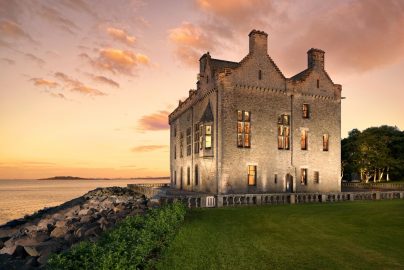 The second announcement is more long-term as The Distillers’ Charity (the philanthropic arm of The Worshipful Company of Distillers, based in London) and Sotheby’s have announced, the release tells, “…a six-year partnership to host three biennial auctions of ultra-rare and unique Scotch whiskies and experiences under the name “The Distillers One of One”. The first Distillers’ One of One auction – comprising one-off, never-to-be-repeated lots specially created and donated by leading Scotch Whisky distilleries – will take place at Barnbougle Castle on the outskirts of Edinburgh on Friday 3 December 2021. There will be over 40 lots, which will showcase the excellence in craftsmanship, innovation and value of Scotch Whisky, ranging in estimates upwards to £250,000. Proceeds from the One of One auction will benefit a fund, which has been created by The Distillers’ Charity focusing on supporting disadvantaged young people in Scotland, transforming their life chances and empowering them to create positive change in their lives and communities. Working with charity partners, including The Prince’s Foundation which offers education and training programmes, the Youth Action Fund will provide young people with opportunities to develop life skills, discover their values and be work-ready.” Another massively laudable effort on the part of the trade. Some of the industry‘s charitable work to benefit people and planet is a bit under the radar so I‘m pleased to feature some of it here.

I recently opened a bottle I was given a while back by Glenfarclas to mark a particular event. Others 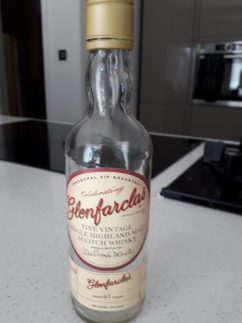 involved in whisky writing also received them –  a half bottle from the year of our birth. One of those bottles you think you’ll  save for a special occasion and then realise you should just get on and share it, which is what I finally did recently. This was a bottle of 49  year old Glenfarclas and definitely one of the finest drams I’ve had.  If you have any such bottles, don’t save them; drink them, share them with special people. You’ll get so much more enjoyment out of them.

Now, this week I‘ve had the pleasure of interviewing friend and former colleague, Ken Lindsay, very recently retired as Chivas Global Brand Ambassador, thought of as Mr Ballantine‘s by many but responsible for educating on and promoting other Chivas Bros. (Pernod Ricard) brands too. That was just a couple of days ago so it will form the next column in mid-August by the time I‘ve transcribed the text.

Meantime, happy dramming, whichever season it is where you are right now.