It seems the Green Party influence in Scottish government has expanded even further into Scotch Whisky. They already don‘t like peat use even though its application in Scotch Whisky accounts for a very, very tiny percentage of peat use/carbon release and some distillers are looking at peatland management anyway. As all of you will know, not all distilleries use peated barley in their process. No, this time they‘re going after the angels‘ share and the government is to review whether this aspect of maturation has health and environmental impacts. In fact the study is „commissioning a review into the impacts of non-methane volatile organic compound (NMVOC) emissions“ and that encompasses those from whisky maturation. The statement says, “Scotland’s whisky industry is extremely valuable to our economy and we recognise the sector’s commitment to good environmental practices.” It‘s not only extremely valuable but vital. The industry has already done much in several areas to improve environmental practices. Now, there have been complaints in recent years from homeowners near maturation sites complaining that black mould on their homes comes from whisky maturation. It also seems to affect buildings near cognac maturation as well as certain other spirits. There appears to be some evidence that it‘s less prevalent near salt water and that the wood used for maturation may also be a factor. An interesting paper on the matter can be found at https://pdf.sciencedirectassets.com/279953/1 (the full link is much longer but would take up loads of space here). There‘s another at https://www.emerald.com/insight/content/doi/10.1108/IJBPA-05-2021-0079/full/html and a good honours degree research paper by a student, H.J. Hearle Physiological Effect of Saltwater on the “Whisky Fungus”, Baudoinia sp. at The University of the West of Scotland in 2018. I was kind of torn between the „Oh, God, what will they interfere with next?“ response (and a concern for how this might affect the character of whisky if they insist on interfering with another production process that may have little impact, apart from some grubby looking buildings), versus a concern that it might really affect people‘s health.  Yet there is a statement from the Scotch Whisky Association pointing out that the wee pretendy government (Billy Connolly’s words) has previously stated it “is neither harmful to health nor impactful on the environment due to its rapid dispersal.” As  mentioned above, the main concern amongst the public seems to have been people complaining about the effect on the outside of their homes. I feel the government has far larger environmental targets to go after. 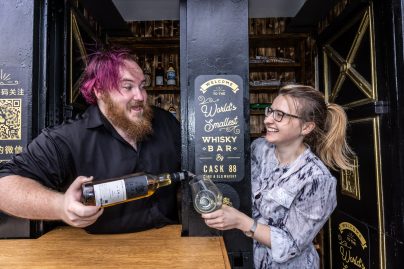 Those nice people at independent bottler, Cask 88, have set up the world‘s smallest whisky bar for the duration of the Edinburgh Festival Fringe. It‘s in the city‘s West End of Princes Street not far from the Johnnie Walker Experience. Set in an old police box, there‘s just enough room for a bartender and one customer plus some bottles of their single cask whiskies, all limited editions. Also, the drinking cups are edible. The drams are free but you can book only one slot per day. If you like what you sample you can buy from their website. Fun promo idea. Do check it out if you‘re in Edinburgh as it‘s there until 28th August.

Now that one wasn‘t a finalist amongst the bars I saw last week. It was my pleasure to be a judge for certain bar awards which saw me in some great places all round Scotland. The whisky ranges, standards of service and training, their enthusiasm, creativity and ambition were all impressive. The results are announced later this year. This week I‘m out looking at licensed retailers for another award which I‘ve also judged before and am looking forward to seeing what those stores offer.

I was trepidatious recently when I read that one of my former brands as a marketer, The Glendronach, is to be expanded in a £30 million 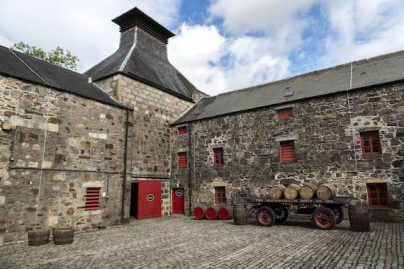 pound 3 year exercise, such is the demand for its delicious output. Of course, we need some certainty that the demand is still there by the time the whisky from this expanded production is ready for drinking as a single and for use in blending. Personally, I don‘t doubt that. Trepidatious? Yes, because it‘s such a lovely little distillery and location, I worry about how it will look once completed and how and where the still house will extend. I‘m intending to ask about that bit soon so hope to bring more info in due course. Having said that, years ago we tried to get company funds (it was a different owner then) to change the roof and frontage of the less-than-pretty 1960‘s still house to be more in keeping with the old stone buildings but were refused due to other priorities. I‘d hope the current owners will take a different view. We‘re told the expansion plan will preserve the historic site, including the restoration of the former maltings building (I’d love those to be restored as maltings) as a working production area and that all existing buildings and the courtyard will remain. If the visitor centre refurb is anything to go by all should be well, though. 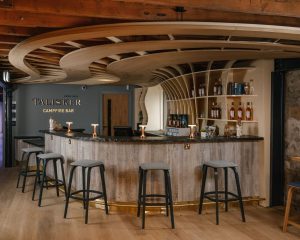 A media release came in recently about the completion of the new brand home refurbishment at Talisker on Skye. I was on Skye not so long ago but sadly, it was a fleeting visit so no time to visit the new set-up. It‘s not a part of Scotland I‘m in very often though they have offered to arrange a look round for me in future. Meantime I and you, if you haven‘t already seen them, will have to make do with some official pics. There will be three new tour types including a multi-sensory Made by the Sea tour. If you haven‘t been to Skye then I do urge 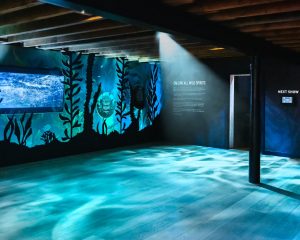 you to go though not in midgie (Skye‘s mosquitoes) season when it‘s warm and damp. The scenery on the island and on the way there from any direction is fabulous and it was really busy in some locations we drove through. We‘d just been commenting on how much quieter it seemed than we thought it would be and rounded a corner to see a large group of Japanese tourists taking photos of livestock and another cross-country pathway thronged with walkers. Lovely to see visitors back again and, of course, there is more than one distillery to see on Skye as well as some good bars and places to stay.

Nothing to include for nosing and tasting this time. Some new whisky expressions have been released but largely rare and expensive with very limited availability of samples. I do have one exclusive sample but have been asked not to publish the tasting note just yet. I will taste soon, though and await news of when I can publish.