Hello and a Creepy Halloween to all 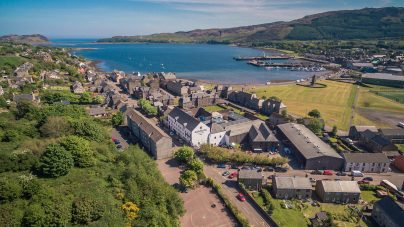 A few weeks ago I received a media release from Glen Scotia distillery in Campbeltown advising me that they are hosting a performance of a new, modern opera set in the distilling world. It’s such a great idea. It’s called “Navigate the Blood” and has been co-written by indie folk band Admiral Fallow and composer, Gareth Williams, with libretto by Sian Evans. We are told the story is about, “… a couple whose son has disappeared in mysterious circumstances, with the action taking place in a small family distillery. The new production combines singing, music, theatre and storytelling, and has been created to reflect the lives of the distillery community in Scotland. By being relevant to those based in Scotland’s distilling regions, it also aims to encourage new audiences to experience opera.” I’m hoping these performances and the names involved will encourage a lot of people (including younger ones) outside of those communities to go too.

It’s being performed in distilleries all over Scotland and some tickets are still available from www.seeticket.com . I 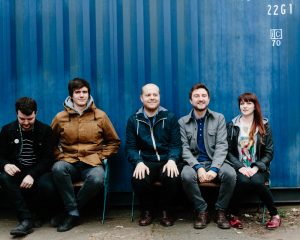 wasn’t going to be able to go to Campbeltown myself so told their PR people I would go and see it in Glasgow. However, Campbeltown on 9th November would make a lovely weekend jaunt for those who have the time to visit and tour the distillery too. Please support  them. Though other distilleries in Scotland are hosting it, Glen Scotia was the only one to send me a release so kudos to them.

I tasted their Victoriana expression at a recent wine and spirit show put on by the Inverarity One to One shop in Glasgow and it’s divine. 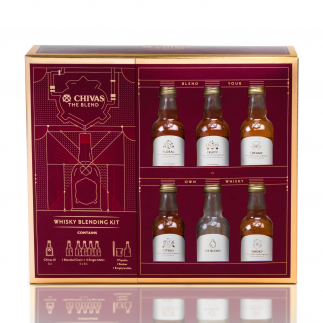 In a media release just in today (31/10) Chivas has launched a Blending Kit featuring a selection of whiskies and tools to give Scotch lovers the chance to “blend their own”. Another fine idea and just in time for the Christmas list. Not being cynical – I think it’ s an ideal present for a true Scotch Whisky fan who will understand the importance of blending in the industry – and will maybe educate the malt snobs.

The kit, priced at around £25, contains four single malt whiskies and one blended grain whisky, each representing a different flavour characteristic: floral, fruity, citrus, creamy, and smoky. Armed with a pipette and a beaker – plus a bottle of the fine Chivas 12, for inspiration – whisky fans are encouraged to explore, experiment and have fun testing their skills and senses to combine – carefully – the whiskies and craft (yes – the big guys do craft too) a blend worth showing off to others.

The release says the kit “was launched to celebrate the magic of blending Scotch, and to bring the craft to life outside of Chivas Director of Blending Sandy Hyslop’s blending room. Sandy, who’s been blending Scotch whisky for more than 30 years, said: “At Chivas we believe that blended is better – in life and in Scotch. Every day I get to indulge in my greatest passion, experimenting with the world’s finest malt and grain whiskies to create something extraordinary when blended together – and this passion is something I want to share with other whisky fans. Each component in a blend plays an important role in determining the profile of the finished whisky – I can’t wait to see what creations my fellow blenders around the world put together.”

Whisky lovers around the world are invited to give it a go themselves and share their success stories on Instagram @ChivasRegal using #MyChivasBlend. Find an interactive guide to your Blending Kit experience and why blended is better at Chivas.com .”

I love doing blend your own sessions with groups of consumers. Can get a bit messy, though, with all those measuring tubes and other paraphernalia.

Ian Macleod Distillers bring us a new expression of Smokehead – Smokehead Sherry Bomb (48%abv). Now, Smokehead is no shrinking violet anyway but this one has added impact 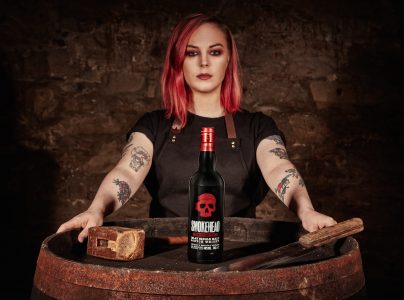 from a company that understands and uses its sherry wood well. It’s just out in the UK and reaches other markets in November. No sample so their tasting notes are :
“The First Impression: Thick peat lets you know you’ve got a serious Islay single malt on your hands. Then a fruitier, creamier feel – soft rich oak, soothing custard and vanilla. But don’t get comfortable – this is only the beginning.
The Full-on Flavour: Tie yourself down and wait for the hit of oily black smoke, with a rich heavy mouth-coating peaty feel. Then along comes a sweet sticky flavour of barbecued banana (yes, really), tangy sultanas and dried fruits. Told you it was different.
The Finale: The peat returns, just as you hoped/feared it would. This time it’s brought some authentic Spanish sherry oakiness with it, pleasingly and disturbingly sweet. And one last sharp salty reminder that you’re not dealing with the ordinary here.”
Well, certainly makes me want to try it. I’d like to taste it alongside Ardbeg Uigeadail; a peated, sherried Bunnahabhain and a Dark Arts or Octomore from Bruichladdich. Now that would be a fun evening. Would need plenty of water biscuits or bread in between each one, though. 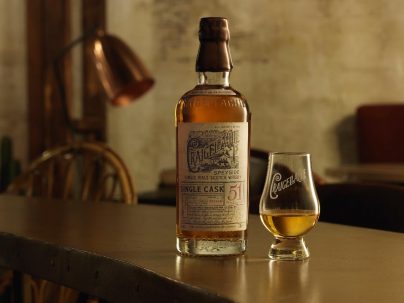 Those nice people at Dewar’s are giving away Craigellachie 51 Year Old. Yes – giving it away. Over the next 12 months, CRAIGELLACHIE 51 will be made available for whisky lovers at special tastings around the world, in four key markets. Though it was given an outing at the Speyside Whisky Fest, none of those special tastings is in Scotland. The first ones are in London at the renowned whisky shop Milroy’s of Soho from 26th -28th November in the form of a pop-up bar – Bar 51. Reservations for tickets opened a couple of days ago and 150 free tickets will be picked from those applications. For a chance to drink Craigellachie 51 go to www.craigellachie.com/bar51 .
Global Ambassador Georgie Bell commented: “We wanted to do the unthinkable. We wanted to make a typically collectable Scotch more accessible. We want to give as many people as we can, the chance to try this incredible whisky, because how often does a whisky of this age and calibre actually get tasted?” Good point and a brilliant idea. Better than having it hoarded in the collections of those who could afford to buy a bottle, were it to be for sale.
Malt Master, Stephanie Macleod says of the liquid “51 years encased in oak is an extraordinary length of time. Starting life in 1962 as an aggressive beast, the whisky over five decades has developed a softer side yet still retains the distinct umami, muscular note that Craigellachie is known for.”
One of my favourite releases in the last several years has been the Craigellachie 17 Year Old. I’d love to try this one to see how it has stood up to its 51 years in wood (it must be good or they wouldn’t be offering it) but won’t manage to be down there. Following its London appearance, Bar 51 will carry on to Australia, South Africa and the U.S throughout the next year. Good luck to anyone who applies for a ticket.

I see Macallan has changed a range name again. Indeed, it was announced a while back but a release appeared recently as the new packaging is out. It was the Fine Oak range. Now it’s Triple Cask Matured with expressions at 12, 15 and 18 years old. Same whisky, new name, new pack. Certainly it’s an easier concept to understand than just “Fine Oak”. This renamed range has used sherry-seasoned casks made from US and European oak as well as former bourbon wood. I really need to sit down and track the Macallan changes of name and expressions and the reasoning behind them all over the last few years. A kind of family tree or organigram, if you will.

What have I been tasting recently? Well, for a start, two new offerings from Compass Box, mentioned last time, but the delayed samples have turned up. The background to these was in last month’s column.
Story of The Spaniard:
Appearance: Light amber/old gold. Tears slow and sticky; close together then wider apart so some age here,
Nose: Touch of sulphur; candied citrus peel; oak and vanilla; slight sweaty sock notes; sultanas. With water, golden syrup; coconut; barley sugar. Left to sit it gets softer with some toffee/fudge notes and a hint of milk chocolate.
Palate: Slightly unctuous mouthfeel; oak; liquorice; dried citrus peel; dry, herbal and astringent; some sulphur – like struck match fumes catching the throat; a touch of dried fruit a bit of smoke and a tad tannic.
Finish: Long and very dry.

There were also the six new offerings from Distell which were
-two Ledaigs (both 19YO from 1998, an Oloroso Sherry Finish and a PX Cask Finish)
– a Deanston 2008 Brandy Cask Finish
-two Bunnahabhains (2008 Moine Bordeaux Red Wine Cask Matured and a Palo Cortado Cask Finish)
– a Tobermory 2005 (12YO Fino Cask Finish).
The Ledaigs were certainly smoky and peaty but not quite to my taste, as someone who does like peaty, smoky whiskies. I found them better on the nose than on the palate and 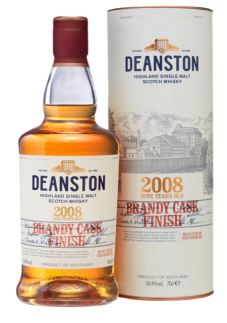 preferred the oloroso to the PX. Interesting, though, as I don’t get to taste them often. Same with Tobermory and Deanston. I get to try Bunnahabhains more frequently and their 18 and 25 year olds are amongst my preferences. Much as I’ve liked some of the peaty expressions, I prefer the Bunnas with little or no peat. I think my favourites of all those supplied this time were Deanston and the Bunnahabhain Palo Cortado. I found the Tobermory a bit flat. Here are my Deanston 2008 Brandy Cask notes:
Appearance: Rich gold with brassy glints. Tears quite swift and close.
Nose: Ripe dried fruit – sultana and apricots like an older brandy; also banana. Not much oak but some vanilla; Left a while there are more raisin notes and some demarara sugar caramel. With water it gets creamier.
Palate: Fruity with some aged brandy/cognac notes; marzipan; oak; light honey and some vanilla. Quite mouth drying and with youthful characteristics.
Finish: Medium length with a touch of fruit and oak; dry.

I liked it but felt it had more going for it on the nose than on the palate.

I also received a package of samples with a lovely book of this year’s Diageo Special Releases. Not had time to taste them all yet and no more room here but will cover some of them in November in case anyone’s feeling flush for Christmas.

Lastly, a little winter warmer in the shape of a Rob Roy recipe from the liquor.com website (I subscribe to their e-mails) :
2 oz Scotch (they recommend Chivas Regal)
3⁄4 oz sweet vermouth
3 dashes Angostura Bitters
Garnish: Brandied cherry
Glass: Cocktail
Add all the ingredients into a mixing glass over ice and stir.
Strain into a chilled cocktail glass.
Garnish with 2 speared brandied cherries.
Chases away thoughts of miserable weather rather nicely.

Back you all in late November with some Christmas cheer.
Caroline