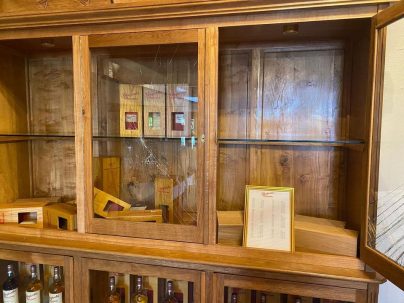 Just this last weekend, thieves broke into the Glenfarclas Distillery visitor centre and stole over £100,000 of whisky during the night. An alarm must have gone off but apparently they were in and out in just several minutes. Reports say they knew what they wanted as the rare and valuable bottlings were stolen from the cabinets even though they had reinforced glass. They took  the Family Cask range from 1954 to 1975 (a bottle from each year) and a bottle of 60-year-old. Whisky enthusiasts are being asked to report to Police Scotland any bottlings of Glenfarclas being offered for sale and not from legitimate sources. I would suspect they will be offered mainly in the UK or to collectors so all you whisky fans and on-trade people please look out. I‘m assuming they won‘t be daft enough to try and sell these to shops but you never know. A BBC report says two men are being sought. Hope they catch the thieving scum. Not only have they caused damage and left staff upset but they‘ve also stolen part of Glenfarclas‘ history. It‘s a lovely place, family owned and delightful people who don‘t deserve crap like this.

Only one tasting note this time. I‘d been awaiting a sample of a new Tamnavulin expression. It‘s Tamnavulin White Wine Cask Edition (40% 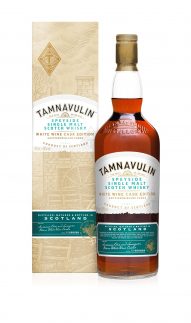 abv; no age statement). The sample came with a can of Speyside Spritz using this whisky mixed with elderflower cordial and soda water – and damn tasty it was too. Used it as a pre-dinner drink at the weekend. Anyway, to the single malt itself. Tamnavulin is a bit like Fettercairn also from the Whyte & Mackay stable in that it‘s been there a long time but nothing much was done with it as a single malt until fairly recently (2016 in this case). It‘s been good to see the company maximising its assets and letting more consumers see how good they are. The white wine casks used here for finishing are sauvignon blanc but no indication where from. The spirit began its life in bourbon wood before transferring to the wine casks. UK price is around £32. It‘s on sale in the UK now with US and European markets to follow soon.

Nose: Fresh, floral, vanilla, custard/creme anglaise. Soft oak wood; damp earthen floors and wood. Gentle and fairly mellow. None of sauvignon blanc‘s young blackcurrant or gooseberry notes but some grassiness. A bit of ginger spice. With water, a bit more fresh grass, camomile, melon and ginger and just the beginnings of some toffee. A touch of apple and warmed cream.

Palate: Medium mouthfeel; slight lusciousness. A slight peppery and ginger tang across the tongue and cheeks. Some camomile and floral notes as on the nose. Young stone fruit.

Finish: Short – medium; grass and light herbs. Spritzy (even not as a cocktail!); finishes quite dry and earthy.

This is a refreshing spring/summer or pre-dinner dram and definitely mixable. Indeed, the cocktail supplied is one I‘d recommend you try. No recipe was supplied but try your own levels of the mixers to get it right for you. Chill the mixer ingredients before adding to the whisky and serve over ice. A lime garnish might work well too.

Sticking with Whyte & Mackay, they have a number of marketing and communications vacancies, mainly on the single malts. Their marketing team is headed by an ex-colleague of mine, brilliant and creative marketeer, Steven Pearson. If any of you out there are marketeers with a bit of experience – or a comms or research professional with more years on your cv – and want to work on great whiskies then these are opportunities you should explore. The positions are: Brand Controller – The Dalmore; Global Communication Manager; Consumer Insights Lead; Whisky Marketing Executive; Brand Manager – The Dalmore; Brand Manager – Tamnavulin; Brand Manager – Jura. Find out more at https://hubs.ly/Q019HJhK0 .

W&M have also announced large investment in their Dalmore Distillery and, something of particular interest to me, an expansion of their Scottish Oak Programme but I want to find out a bit more about the latter from whisky maker and mastermind behind the programme, Gregg Glass, before writing about it. 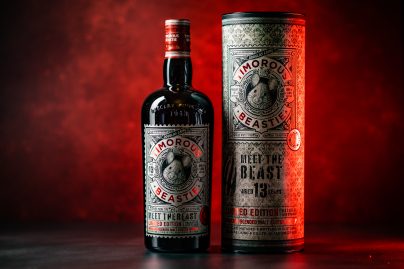 News in this week from Douglas Laing of a new expression – Timorous Beastie “Meet the Beast” Limited Edition at 13 years old and 52.5% abv. It was matured entirely in bourbon barrels. There are only 3,000 bottles and it should be priced at around £75 in UK and similarly overseas, dependent on local duties and taxes. In the media release, Stephanie Harvey, Timorous Beastie Brand Manager, commented :

“A date we’ve come to associate with “expecting the unexpected”, Friday 13th is a most appropriate launch for “Meet the Beast” Day… Timorous Beastie has been celebrated for its somewhat ironic positioning: Our little field mouse might look cute and unassuming, but the high strength, non-chill filtered monster of a dram inside is mighty!“ I‘ve requested a sample of this blended Highland Malt Whisky as TB is one of my favourites from Douglas Laing so fingers crossed. 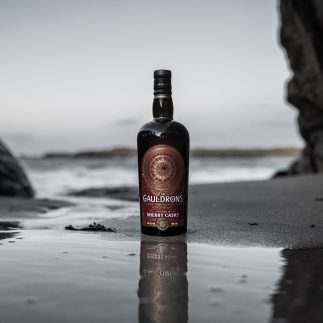 Not content with that one launch they‘ve also come up with a new epxression of The Gauldrons, their Campbeltown malt whisky – The Gauldrons Sherry Cask Finish (46.2% abv; no age statement and no chill-filtration). Another limited one, this time at only 2,125 bottles.It‘s a blend of single cask single malts from Campbeltown which had a finishing period in specially selected Spanish Sherry Casks. It‘s available now online via the Douglas Laing website and through specialist whisky stores. It should retail at around £60 per bottle in UK and equivalent wherever you live. The Gauldrons means “bay of storms” and it was here, in hiding following defeat of his armies, that King Robert the Bruce was inspired by watching a spider spinning its web to keep trying in the face of difficulties. The web design features on the label of all expressions. 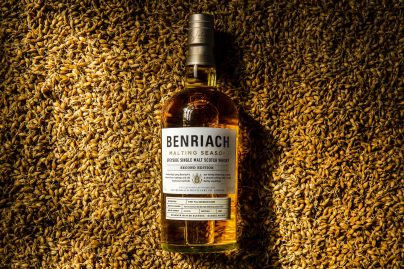 We now whip up to Speyside where Benriach has launched Benriach Malting Season Second Edition (48.9%abv), the next expression in their annual release produced entirely using malted barley from their own floor maltings. Benriach is one of only seven distilleries in Scotland that continues to practise this tradition and it‘s definitely a feature to see.

The first edition was launched in 2021. This second one, „is crafted from Concerto barley, chosen by Master Blender Rachel Barrie for its wholesome cereal flavour. The floor malted spirit has then been slowly matured in first fill bourbon casks in Benriach’s earthen floored dunnage warehouses, giving a beautiful barley gold colour to the expression.“ Further comment came from Global Brand Ambassador, Stewart Buchanan, „Each new edition of Malting Season will use carefully selected types of barley and bottling strength, making each annual edition one of a kind in their own right.” This bottling used 30 first fill bourbon barrels, all distilled on 20th November 2013 and the bottling is now available exclusively at Benriach Visitor Centre shop before being released globally next month. A very sound reason to visit the distillery now. I love how they use different types of wood at Benriach under Rachel‘s vastly experienced eye and their experiments with barley can only add to the interest.

Not content with Spirit of Speyside and the upcoming Feis Ile, Holyrood Distillery in Edinburgh is launching the first whisky and beer festival in Edinburgh, The Mash Up, running over 3 days from 3rd – 5th June. As it clashes with the last few days of Feis Ile, you may have to make hard choices here! The distilleries involved are all newer ones and include Kilchoman, Clydeside, Nc’Nean, Glasgow Distillery, Isle of Raasay, Wemyss Malts and Woven. You have to book a time slot and there are three of them on each of the three days with plenty more to do besides, including beer and whisky pairings at the bar and listening to live DJ sets, not to mention a Mash Up after party nearby (separate ticket required for £10). Get your main event tickets now at www.holyrooddistillery.co.uk.  £35 per person and include two half pints and a dram from chosen exhibitors, as well as 10ml. tasting samples from others.

Last launch for this time is the third expression of Glengoyne‘s Legacy series. The Legacy Series: Chapter Three is the final instalment, 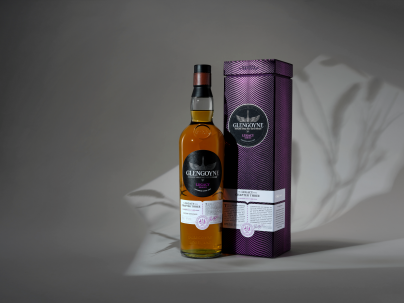 apparently and carries on telling the stories „of the people who have shaped the distillery over the last two centuries“. The Glengoyne Legacy Series: Chapter Three is the story of Sir Arthur John Tedder, an excise officer at the distillery. Sir Arthur, we‘re told, „is said to have pioneered the distillery’s ‘unhurried’ approach to whisky making, shaping the whisky as it’s known today.“ He was resident at the Customs House at the Distillery between 1889 and 1893 and now used for other purposes. Bottled at 48% abv (NCF), Glengoyne Legacy Series: Chapter Three sounds fabulous from their notes. No sample this time. I have to say I‘ve loved the previous two and surely there must be more legacy stories to tell from a distillery with such a long history so why stop at three I wonder. This expression is available globally now and via the distillery shop and website https://www.glengoyne.com/our-whisky/our-collection/legacy-series-chapter-3. They were hinting at it during my recent visit. It will sell for around £70 per 70cl. bottle (UK pricing).

That‘s it for now. I‘d better get on with deciding my whisky pairings for my Feis Ile dinner menu. It usually takes quite a bit of experimentation here at home and a lot of to-ing and fro-ing amongst the whiskies before settling on the pairings but I‘d better make some decisions soon!