I don‘t know if you‘ve been attempting Dry January but I haven‘t. Simply drinking good wines and whisky in moderation and largely at weekends, as usual. However, this week saw Burns Night on 25th when we celebrate our national poet, Robert Burns. We‘ve looked at whiskies with haggis before and it doesn‘t have to be a single malt by any means. This year, the nice people at Whyte & Mackay sent out a writers‘ pack with two whisky cocktails and an extract from a Burns poem, followed by a miniature of their Jura 18 Year Old single malt which they recommended alongside the traditional Burns Night haggis, neeps and tatties. My Scottish thriftiness reckons putting them all in the one pack would have been cheaper but it wasn‘t my budget to worry about.

Anyway, these are cocktails you can try at home or make in your bar/restaurant for clients. We had a Cranachan Highball in a can and a Bobby Burns in a small bottle. The Bobby Burns used the W&M blend with Benedictine and Martini Rosso, the drier of the two and arguably a little more sophisticated. The star of the show for me was the Cranachan Highball. Maybe it‘s my sweet tooth but I just loved this one. The recipe as supplied is:

Top up with Cream Soda

How to Make:
*To make your Honey & Raspberry syrup: combine equal parts (for example 100g) raspberries and boiling water and mash. Strain off the liquid and mix with equal parts honey to form a sweet, fruity and pink syrup! Hint: add more raspberries if you like it sharp or more honey if you like a sweet tooth!

Add all your ingredients to a highball glass, fill with ice, and top with cream soda. Give everything a quick stir in the glass, garnish and enjoy!

Looking for a super simple version?
Try Whyte and Mackay Blend, topped with Cream Soda, and garnished with a couple of raspberries.“

If you’re a keen mixologist, I‘d go the whole hog and try making the syrup.

Now, I put the can in the fridge to chill a bit first before putting into a glass with ice and giving it all a stir. When I was little we called cream soda American Cream Soda and it‘s available in bottles or cans (it‘s fizzy i.e. carbonated, if you‘re not familiar with it). Another great use of it at home or in Italian-owned cafés was to put a big scoop of vanilla ice cream into a glass or sundae glass with a healthy pour of American Cream Soda. It‘s called an ice cream float and consumed with a spoon – or some of it at least. I don‘t know if any old-style cafés still offer these as I tend not to hang out in them. It occurs to me that this cocktail mix would make a fine alcoholic version! Might be my dessert of choice this weekend. I‘m told that there doesn‘t seem to be a plan for W&M to offer this as a canned pre-mix alongside their bottled whisky range. I wondered as there‘s a whole raft of pre-mixes in cans now but a bit less so for whiskies and I reckon this W&M one could be really popular.

I did say before that I‘d play around with the Halen Mon Smoked Water in some whiskies. It‘s certainly smoky 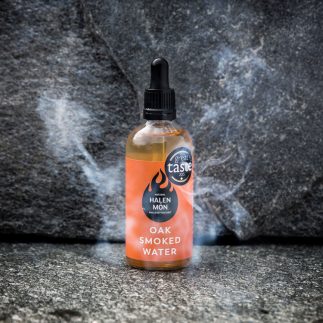 when you nose it from the dripper bottle. As I discovered it as part of a visit to Wales set up by Aber Falls Distillery, I recently tried it in a dram of their whisky and Halen Mon had warned that a little goes a long way. Well, I used 4 drops and it did make a slight difference but I do need to try some more drops and with other non-peated whiskies. I do rather like the youthful Aber Falls whisky as it is but this didn‘t spoil it. One for bartenders to consider in making a Smoky Martini rather than using a smoky whisky? Just a thought. It‘s good as a cooking ingredient too, as a seasoning.

Douglas Laing & Co. Launched a new expression of their blended Highland Malt, Timorous Beastie – named after the description of a mouse in a Robert Burns poem – in time for Burns Night on 25th January. This column wasn‘t due then but there‘s 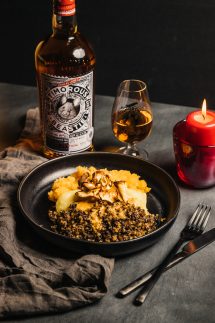 no reason to save it for a Burns Night – if you can get your hands on a bottle. Only 297 bottles were released, exclusively for the UK. We‘re told it‘s, „Aged exclusively in ex-American Bourbon barrels for a minimum of 20 years and offered at an alcohol strength of 42.7% without added colour or chill-filtration, Timorous Beastie 20 Years Old is a harmonious marriage of bold, contrasting spicy and sweet flavours.“ Some of those flavours being “toasted marshmallow” and “spicy cinnamon”. It‘s usually a very satisfying dram so I‘ve no reason to expect this will be any different. I didn‘t request a sample as it‘s rather too rare for that. It‘s not the oldest Timorous Beastie in the range and cost of this one is around £100 – that‘s a pretty decent price, given that it‘s all malt whiskies at minimum 20 years old and such a limited bottling.

Next column in February will be ready round about Valentine‘s Day so I hope you‘re thinking about your drams/cocktails for that (try the one above) for home consumption or to offer your customers. Till then,